Fairy Tail has always been a strange manga. On the one hand it has fantastically drawn shōnen action moments, compelling characters, some incredibly original ideas and interesting plot twists. On the other it’s incredibly cheesecake boobs-first fan service heavy in nature and has characters that look a little too familiar to other manga series. When it comes to the anime things stay ropy, it has some of the greatest music of all time and yet some of the blandest animation and too much unnecessary filler. As a fan of the series I had all but given up hope for a new game, the last entry was an average action game on the PSP. I was disappointed that Koei Tecmo didn’t hand the IP to the Dynasty Warriors team but what we have is a new type of JRPG from Gust instead. Is it a cash in on a series finishing up, or is it the S Rank Quest we’ve been waiting for? 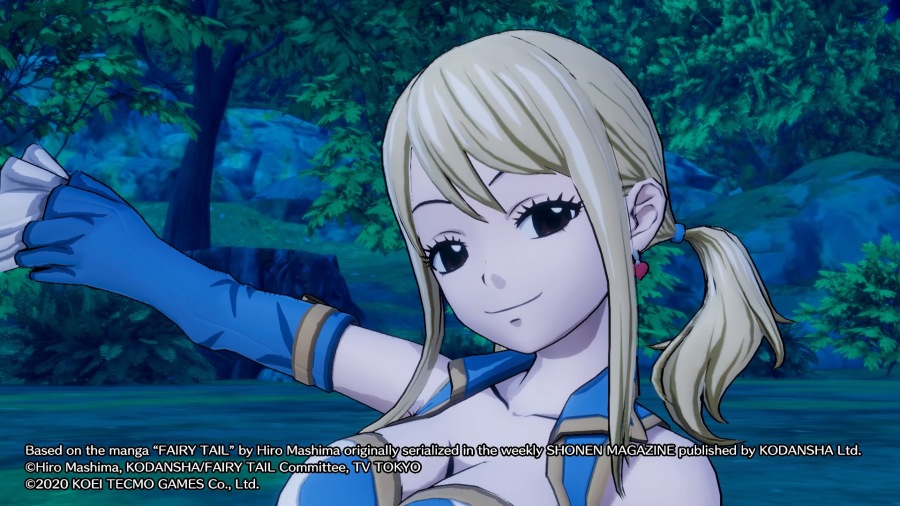 Fairy Tail doesn’t start at the beginning of the manga nor in the middle during the time skip (the usual shōnen “3 years later” moment halfway through a series) It strangely begins just before the skip occurs during the battle with Hades. After the short introduction to the cast and a rough guide to the combat system, you’re blasted to 7 years into the future and tasked with sorting out the failing guild (unsurprising given all the strongest wizards were in the time bubble) After a few hours of getting to grips with the town and setup you’re straight of into the Grand Magic games arc. What’s surprising is how much of the manga is in the game, you can expect the Magic Games Arc to finish and still have a few more arcs and even extra snippets of the later ones left. Fairy Tail does drag a little halfway through the story but you can easily distract yourself with a lot of content here. The highlights being the fantastically well written extra character interactions and various side quests you can complete along the way.

If you’ve ever played an Atelier game then you’ve already a rough idea of what the real gameplay loop to Fairy Tail is. As you progress through the story you will be building up the guild as you go but along the way you’ll also do side quests, community requests, building improvements, remodel facilities, update equipment and improve bonds between characters. It’s an enjoyable grind; collecting items, killing monsters and travelling around the world to see a little more dialogue or unlock another ability or complete a job request. There are fantastic systems to help with the combat, you can  toggle the battle animations at a click of a button in combat, you can easily see the effectiveness of the type of attack before selecting and even linking all the area’s generic monsters into one battle. Fairy Tail has nice little touches like a character’s expression changing based on the effectiveness of the attack, nearby obstacles blowing up if a chain attack is overkill and having fast load times make the multiple bounties a joy rather than a chore.

Fairy Tail’s biggest problem is with inconsistent quality. There is a lot of story to cover here but it feels at times that the focus was largely shifted to certain areas over others. You can expect to see amazing moments in the Tartaros arc but most of the Magic Games best moments are left to be generic challenges. There is no sky labyrinth to speak of and some fights towards the end feel very stilted. Some story moments will have you running around an incredibly detailed city and seeing drawings from the anime during voice and text. Others are told by still images in a scrap book narrated by Lucy or in poorly animated cutscenes. For every fantastically animated scene at a higher resolution there will be a scene where the characters stand woodenly and the voice actors carry most of the emotion across. Thankfully the core twists and turns are still present and alleviate a lot of the issues with this, it’s just a shame they couldn’t pick a style and stick with it.

Visually Fairy Tail is very much hit and miss. I can understand the scale of modelling every character would be a huge task but it leads to disappointing cutscenes throughout. When the celestial banquet occurs it’s quite obvious that all the spirits aren’t present and there are even a few main Fairy Tail characters that didn’t make the cut and only show up as pictures. Why key scenes that are missing characters aren’t told with images is bizarre as there is more than enough extra content and scenes added to make up for it. Some characters in Fairy Tail look fantastic, the attacks and animations looking brilliant. Other characters look like someone only had fan-art to work from and dialled up the gravure to 11. The text is easy to read and the menus and selections are thankfully easy to use. The biggest issue I cannot get over is what they’ve done with Happy, he just looks like a soulless doll throughout most of the game and only manages to create an expression once during the later arcs. It’s frustrating as there’s some nice ideas and models in the game, it just seems a roll of the dice if your favourites look right or not.

Given how big Fairy Tail is there is a surprising amount of dialogue voiced in the game. Almost every story line is voiced and given how many characters and how much of it is present that’s a huge achievement in itself. Quality control skips a beat occasionally but for the most part the characters sound exactly as they did in the anime. I am very thankful to report that Fairy Tail’s music is absolutely amazing. The anime has a Celtic rock feel and Fairy Tail feels like they’ve nailed the essence of that. The battle music is fantastic to hear even after your 1500th battle and the credits track even has a little musical nod to the main theme. Fairy Tail has a brilliant soundtrack and compliments the action and story telling. The ‘serious boss’ music track is an absolute delight and drives home how urgent your attacks need to be before they strike back and possibly wipe out the party and send you back to the guild. 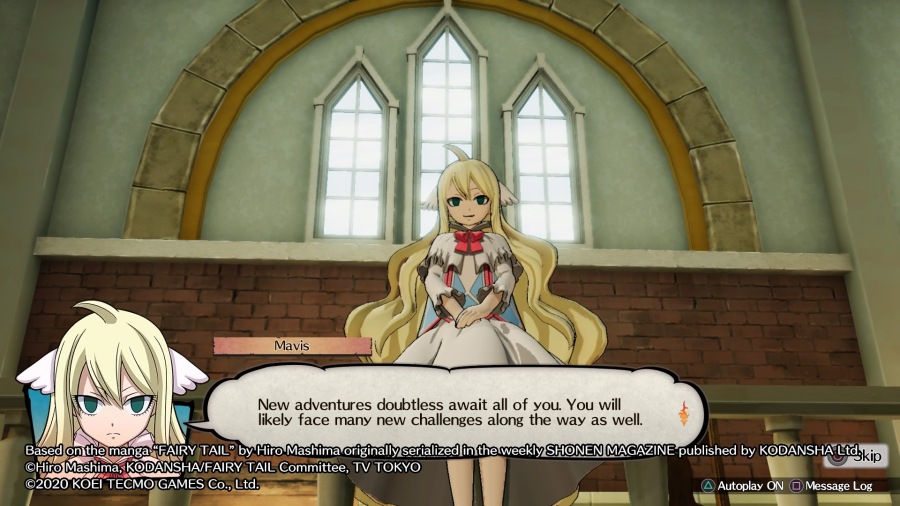 The strange thing about Fairy Tail being inconsistent in its story telling quality is how surprisingly little that matters. Your main core experience in the game is rebuilding the guild and making friends along the way. If you leave the difficulty at normal and complete as much of the optional extras as you go along, you’ll breeze through most of the story. That’s not to say it is a complete cake walk though and you’ll occasionally have to pause and think before dealing with strong bosses. There are duels to be had with single characters that start off as a joke but quickly become incredible challenges. Rather than feeling like a chore, every side quest or favour from a character is an enjoyable experience with the text clearly written by someone that loves the series. Sure, there’s a CGI scene in a pool and additional outfit options for swimwear is the first unlock for every character but it’s the special attacks and interactions that make Fairy Tail special. 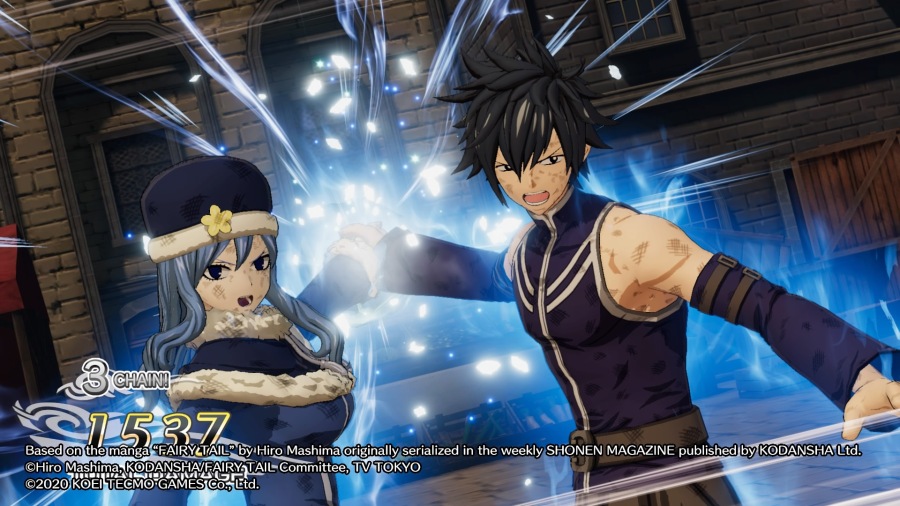 All of this leaves Fairy Tail as a strangely enjoyable JRPG. If you pick it up as a Fairy Tail fan you’ll already be used to the style, you’ll love to see unique unison raids from characters and little nods to different moments in the series. If you’re a fan of Gust RPGs then you’ll be familiar with everything this has to offer and enjoy the systems at play. If you’re new to Fairy Tail you’re in for a bumpy ride but it’s worth looking into. Fairy Tail always had a little too much titillation for me to highly recommend to people and the game dials this up rather than toning it down. At its core though Fairy Tail is still a story about the power of friendship and is really enjoyable JRPG. Despite being a little janky in places and facepalming at times, it holds up nicely on the PS4. Fairy Tail has fantastic moments, marvellous music, great writing and a surprising core loop that is Pokemon levels of addictive.

Review Code provided by Koei Tecmo, Check them out here.
Fairy Tail is out on now! Check it out here.