I don’t really subscribe to the “Port this to Switch” mentality for every popular game these days. Sure it’s a nice system but I’ve never clicked with it enough to want every video game I play on it. If you’re going to port titles to a handheld system it makes sense to port games suitable for that occasional on-the-go gaming need that mobile gaming doesn’t always satisfy. With that in mind it makes perfect sense to see a port of Pix The Cat to Switch. It has already been ported successfully to other systems before and plays nicely in a handheld setting. I know I’ve previously played plenty of hours on the PSVita and now it’s out on PS4, PC, Xbox one and finally on Switch as well. Is it worth the newest addition to the Pix the Cat port library or was this just a hairball scheme?

Regardless of the game mode Pix the Cat has fantastic core gameplay. It’s easily as addictive as Snake on the original Nokia, Pacman in the arcade and those niggly puzzlers on your mobile. All the modes work in a similar fashion; Continually move and aim Pix in a direction, collect eggs in one go, avoid tailing back around onto yourself and avoid the drop off holes until you have all the eggs collected to rack up big bonuses. The fact this port to the Switch is a perfect replica of the game on every other system just makes it a perfect fit for handheld gaming. Pix the Cat isn’t really designed for long gaming sessions in a traditional sense, more the devilishly addictive “one more try” style of play that has you picking up the controller to have a quick go and then 5 plays later put down to play again another day. Pix the Cat follows a similar formula to popular indie titles and it really nails the fun factor that keeps you going back just to get a better score. 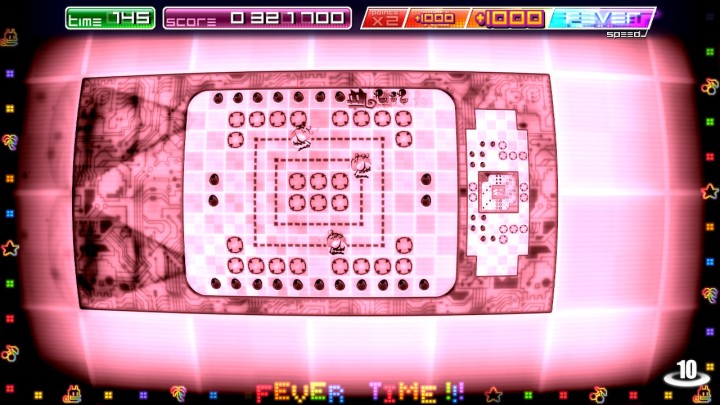 The classic Arcade mode which you’ll spend most of your time is pure frantic fun that encourages you to beat the core levels, daily generated levels or any of your friends scores. You’ll be unlocking a few bits in this mode by simply playing and it allows you to change up the voices and add in your best ghost score runs. The more you play the better you get as you remember the best ways in and out of levels, the tight turns at walls giving you a boost of speed as you fight the timer. The aim of this mode is to get through as many levels as possible before you’re blasted back in a fantastic animation that really installs this itch to speed through as many as possible. The more you score points the faster the action gets. The more the speed, colours and style change until eventually you’ll hit Fever Time allowing you to go through enemies. Your biggest enemy is always getting stuck on your own trail of following ducks and you’ll be swearing more than a few times as you catch up to yourself and crash out of a combo only to start it all over again. Each run a challenge to get to the deepest levels with the highest score. 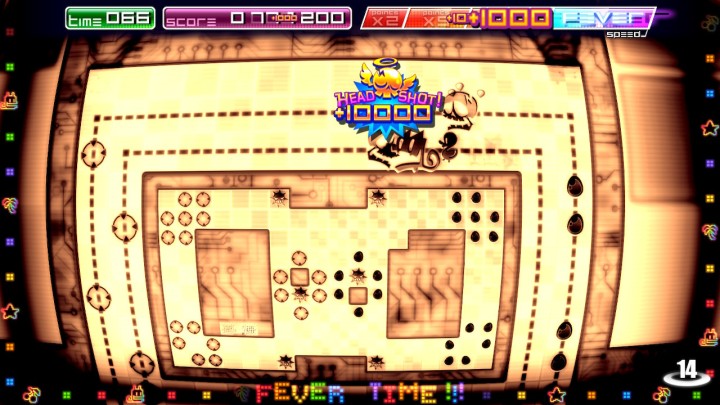 If you need a break from Arcade action though Pix the Cat has a few extra modes that are surprisingly deep and any other title would have partitioned off as separate games entirely. Laboratory mode is the perfect quiet puzzler where you can only move Pix a select amount of times with a classic bonus given each level if you find the correct way to do it in under the par number of moves. Nostalgia mode plays like a nightmarish survival variation of Arcade. Continually collecting eggs until a total number is reached with a bonus for hitting that total faster. Pix the Cat even has a really enjoyable multiplayer game called Arena. It’s an ideal quick multiplayer scrappy game where you collect eggs to fire into your opponent and try to dash through them. It’s a great reminder of what local multiplayer games can bring to the table on the Switch.

As you can tell from these screenshots, visually Pix the Cat has a very polished modern yet retro vibe throughout. Each mode has its own unique visual style that has a high quality design showing off their uniqueness. Even when the action gets incredibly cluttered on screen everything runs silky smooth. Arcade mode nails that nostalgic neon vibe while becoming a trippy fast rush of colour when fever time occurs. Nostalgia mode has a ridiculously charming classic theme of black and white original Disney like drawing. Laboratory mode has a messy germ infested layering effect akin to early Spore stages. Arena mode has this polished almost board game style. It’s all very tightly put together and it’s no wonder to see why this works so well on Switch. When docked it looks fantastic and in handheld mode this port is where everything truly shines.

The high level of quality continues in the sound design. The music is absolutely fantastic. Each audio track nailing the theme of the mode with the Arcade music being exceptional quality that only gets more and more intense as the gameplay matches the frantic nature. It really cements that OMG GOGOGOGO feeling for when the timer starts ticking down and you’re trying to skit past your own trail. It’s a smart choice to have multiple voice over announcers for Arcade mode as some are far more irritating than others and the option to swap them out on your mood (as you unlock them) is brilliant. The sounds of cracking eggs, the satisfying WHOOSH of being blasted back, it’s all really great stuff.

Pix the Cat is not a huge game by any means. After an hour you’ll have unlocked all the modes and likely started to get a decent score in Arcade. Its main appeal isn’t in playing through to completion, unlock concept arts and various extras through the in game trophies/achievements (although this is a welcome incentive to extra play) Your main goal in the game is to better yourself. The ability to skip levels that are too difficult (up to 3 times) in Laboratory and Nostalgia gives you a sense the makers of Pix the Cat really did want you to enjoy yourself. You can always return to them later and the idea of a Bonus is more a self-challenge similar to the strawberries in Celeste. The only person you’re really playing against is yourself, Although in games like Pix the Cat that’s great. 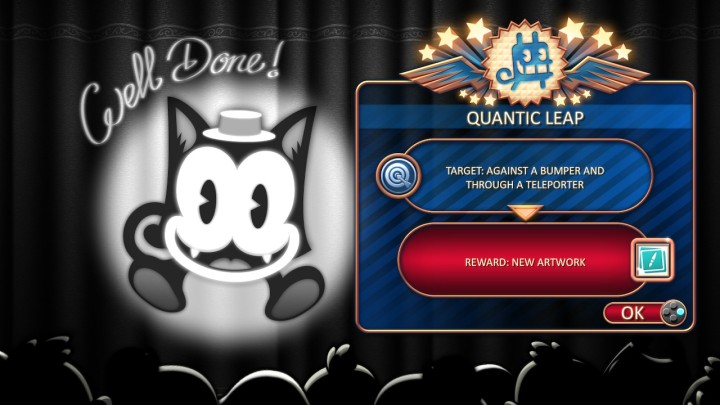 Pix the Cat is finally at home on the best console for it. A quick burst of colour, action and adrenaline. A quick brain teaser in well formed puzzles. A quick handy multiplayer you can click off controllers and have a blast with. A quick pick up and go with great controls that provides just what you want in a handheld game. It was always fantastic on the Vita, nailing that Spelunky feel of “how much further can I get this time” and it’s even better on the Switch. It would have been nice to have some new features from the many other releases of the game but everything here is still fantastic fun. What more could you ask for?