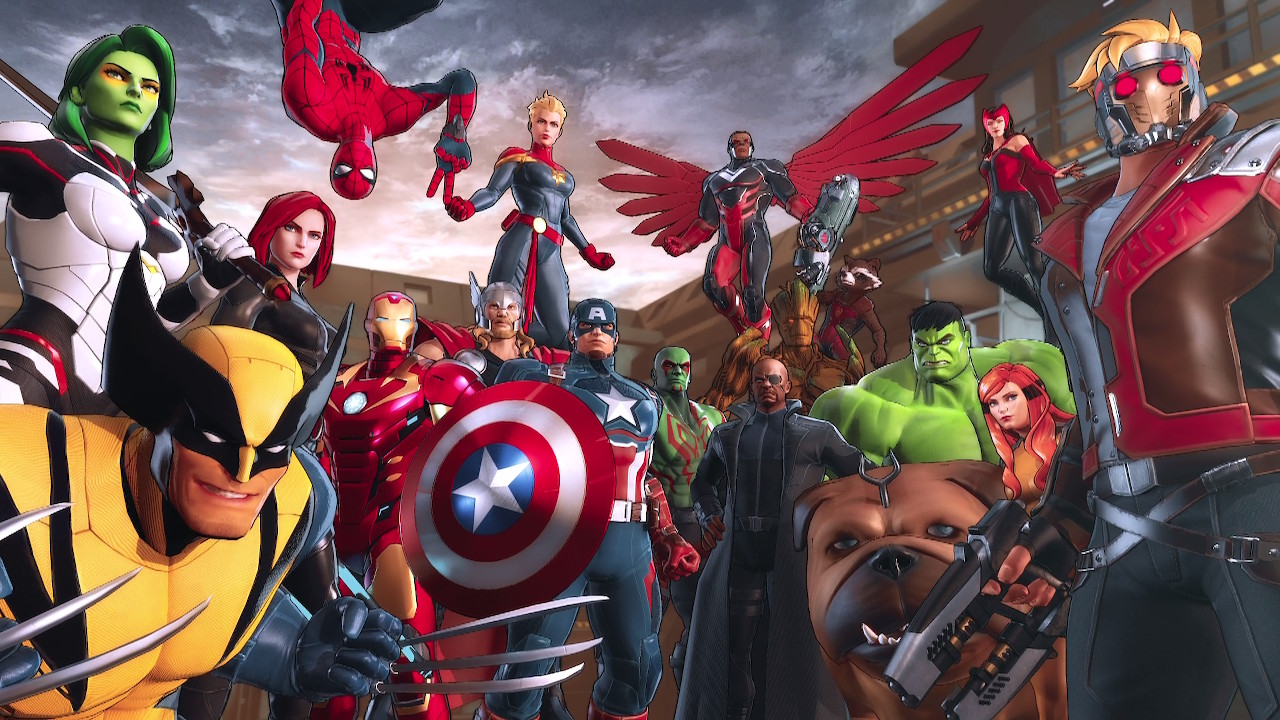 Recently I’ve started thinking about the possibility of a 60th Dr Who Anniversary episode and what that would bring. I figured it made sense to use the idea to write a short story because after all, who doesn’t enjoy fan fiction? Pitching your wildest dreams into short stories or scripts to just get those mad ideas out of your brain and onto paper. Why all this talk of crossover wildness for a review of Marvel Ultimate Alliance 3? Well that’s because it feels like rather than writing a passionate bombastic crossover event, MUA3 (MARVEL Ultimate Alliance 3: The Black Order is just too much) feels more like it was written by design and what passion there was left in the project was handed to the artists and animators while nobody else got a look in.

The first hurdle with MUA3 is that it’s a Switch exclusive. Now contrary to popular belief, I don’t actually hate the Switch (While reviewing Atelier Rorona: The Alchemist of Arland
it didn’t leave my side) Being a Switch exclusive isn’t typically a problem for any game but there are moments of MUA3 where the system chugs a little and it feels like it could have done with a little more power to keep things smooth. It didn’t matter if the Switch was docked or in handheld mode, it just feels like a cut down experience. The exclusivity also means the online multiplayer is essentially dead now. There’s no other consoles or larger market for players and you’ll rarely find more than 1 lobby room open. Given the AI for your allies isn’t all that great you’re really going to need to be playing this entire game using local multiplayer with 2 controllers or with 2 switches and even then, it’s not great.

The biggest problem with MUA3 is unfortunately with its core gameplay. It’s horribly grindy and dull. The controls are overly simple with buttons for a simple light combo, heavy attack, jump, guard, dodge, Ultimate Alliance super moves or abilities. This is a pretty standard action game setup but the problem is you can’t be creative with anything you have. You’ll find yourself tapping light attacks and go to use a heavy (akin to Dynasty Warriors) and you’ll find nothing flowing like you expect to. The character stops and starts as if the two attacks were never intended to be used in a combo together and combos just aren’t a thing. The mobs of enemies are just sponges that are either incredibly weak or ludicrously unbalanced. The fact even a low level goon can get a glancing blow to stagger your character makes the combat incredibly frustrating. Powering through an area only to be taken out by a few shots at a distance and you’ll find the damage quickly piling on with the AI nowhere to be seen.

2 huge problems with MUA3 already and I haven’t even started on the camera controls. It’s clear from the start MUA3 was never built exclusively with single player in mind. Despite the interesting camera angle for solo play that lets you see more of the action, I lost count of how many times it would stick in the wall or show nothing just because I hadn’t guided it with me. You can set it to a ‘classic Ultimate Alliance’ camera angle but this loses a lot of the details and when the mobs start doubling in numbers you’ll be hard pressed to tell what’s going on. It all ties back to the strange mix of design ideas that can’t decide what it wants to do. Wide huge open areas filled with spongy minions and the occasional path to explore but mostly resulting in empty tunnels where you’ll find a single box of loot at the end. There’s little joy to be had in levels that stop feeling unique and start feeling like generic rooms to mash through more goons.

The mess of a camera, gameplay and grind is incredibly frustrating as MUA3 has some fantastic moments and ideas buried away. The character reveals are always a delight and some of the fan service in there is top notch. There are some impressive ideas that tend to work best when MUA3 stops trying to be a mess of multiple forms and becomes a unique entity. There are a few short little fantastic moments; A fight with Antman and Ultimo going off in the background, a 2D silhouetted section in the Hand’s base and entering Asgard are absolute highlights. The sheer amount covered from MARVEL is fantastic and bringing in the Defenders, Inhumans and MCU in one big brawler is a slam dunk idea. The problem is that a few tasty fruit in a grindy bowel of hard to digest bran does not a muesli make. For each impressive scene there are at least 2 ridiculously long sections of goons to grind though and an unbalanced and largely unfair boss to endure. 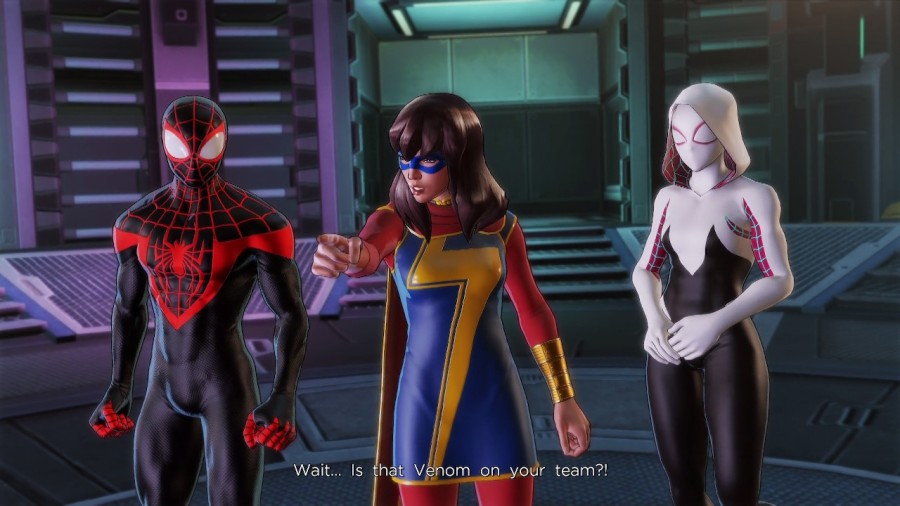 Simply put, the difficulty curve is broken. At the default Supreme difficulty you can expect to play through the game, swapping out new characters as you find them and trying to use the XP orbs to boost the teams to make the best combinations but around 3/4 through the story you’ll hit a ridiculous wall that no amount of item equips, tinkering with teams or grinding will fix. Once you drop that difficulty down to essentially Very Easy in all but name, the game becomes ridiculous. Bosses become long endurance runs soaking in any damage and mobs of goons strangely become the deadliest enemy. Two hits from a sniper that’s a lower level than you and it’s another life lost, another switch to an AI character fighting thin air and hauling it over to yours to resurrect it. It’s not helped by a story that feels like it was stretched much further than it needed to be.

I’m not going to spoil the story but if it were a comic book I’d not be able to recommend it without a lot of caveats. There are some cracking one liners in the cutscenes but the quality of those performances and the sharp writing continuously decreases as the story progresses. What could have been a fun jaunt through worlds to sort out the infinity stones becomes a long grind through too much needless nonsense. By the time you reach the Xavier School for Gifted Youngsters you’ll be asking yourself, “how much more of this is there?” The unlocking of extra content from additional challenges simply adds even more grind and it’s a constant disappointment that the combat is so unlikable because if it were more fun to play and the AI wasn’t so broken there would be a huge amount of content at hand here. Leveling up your own player stats outside of characters in an FFX sphere system, refining equipment and seeing classic comic characters giving off their usual one liners. This should all be an ultimate experience. MUA3 though is just a package that doesn’t come together in a fun way and none of the systems click together. 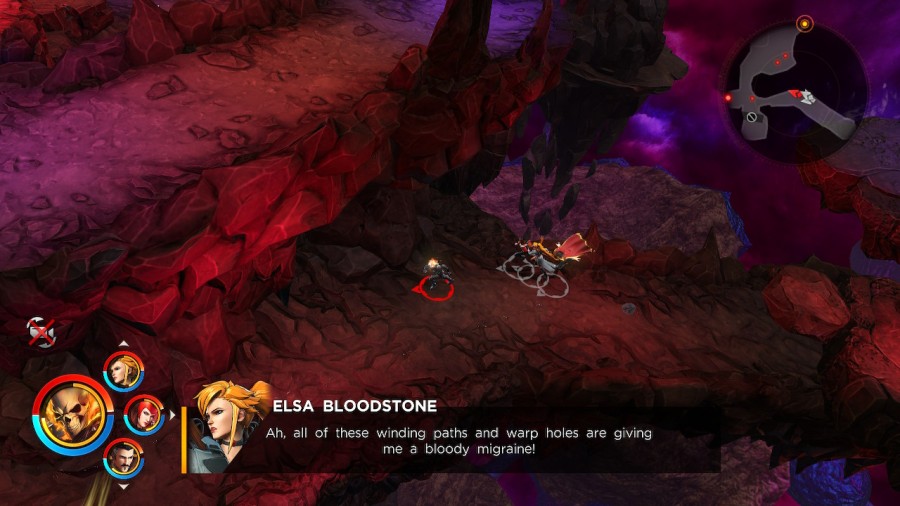 If I say one more time how much of a grind MUA3 is I could delete this review and just put “IT’S A GRIND” but that feeling was all that was left after I’d finished the story. There was no delight at the idea to go and unlock Cyclops or dig into a previously completed chapter. It is simply a relief that it’s over. Clearly nobody ever expected the player to want to go back in either as if you start a new game that’s it, you’re progress is wiped. You need to select specific chapters to replay and good luck leveling up because if you don’t succeed you don’t gain anything. The more I look at MUA3 the more I’m disappointed. An incredible roster of unique and vibrant comic character, amazing artwork for stills and models, some brilliant cutscenes and animation most titles would kill for but all covering a terrible boring mess that overstays its welcome and then becomes the very definition of diminishing returns.