I never used to understand the 10/10s and fanaticism for Bloodbourne. It’s not the only video game most people love that I’ve not “got” either. The Last Of Us, Metroid, Crash Bandicoot and Castlevania, to name a few. A short list of video game series where I can appreciate the quality (some titles more than others obviously) and play to an extent but I never really ‘clicked’ with them in the same way others did. Sure I enjoyed Symphony of the Night and Bloodstained but I’m still trying to complete my first playthrough of Bloodbourne and I see the glee for a new Zelda Breath of the Wild and wonder if I’m seeing a different video game to everyone else. I’d never seen a single video game that warranted that much praise even from titles I love and replay from time to time. This all changed with Control…

THIS REVIEW HAS BEEN EDITED BY THE FBC AND SPOILERS HAVE BEEN REDACTED FOR YOUR SAFETY.

Should any words alter or images appear to move on their own please notify your supervisor immediately. 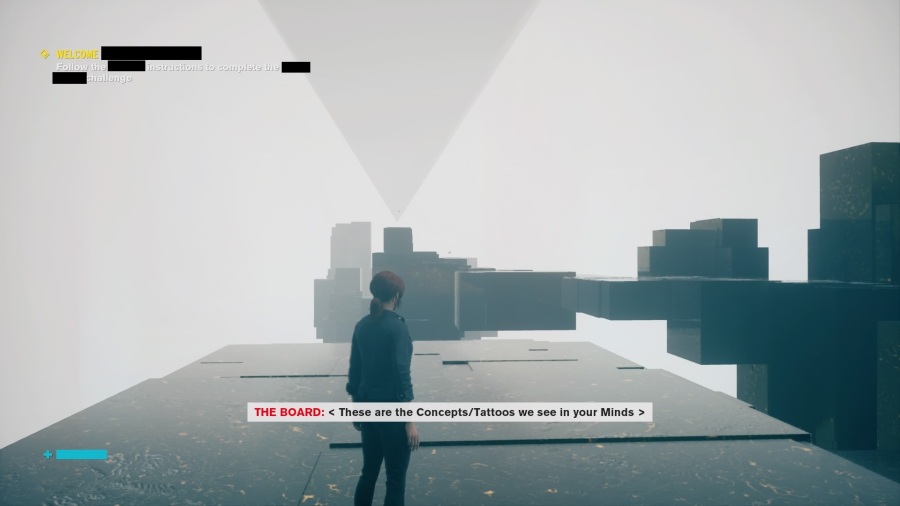 I’ve already covered the basics about Control (in a preview written over here) but if you’ve ever found yourself reading obscure creepypastas about haunted n64 cartridges, the SCP foundation’s wiki or watched some of the best X-Files episodes then you’ve already a rough idea of what atmosphere you can expect going into Control. The commitment to the design is of a quality and consistency you rarely see in a single player story of this size. It’s of the same level you’d expect from Portal or even Super Mario Bros where everything naturally fits together in the world that has been created. From the workplace motivational posters to the collectible memos about workplace squabbles, everything has a use and it all comes together fantastically.

Control wouldn’t be such a fantastic title if it was just the strangeness pulling it along and the combat is so satisfying that I find myself going back to extra procedurally generated challenges just for an excuse play more. It’s the freedom in combat to figure out the best way to progress for yourself with multiple options that work. Yes some bosses and monsters are super challenging at first but you’ve many ways and tools to deal with them. Your amazing gun modifies on the fly between 2 settings but all it takes is a quick pause of the game to swap them around for the other options. A few attempts and you’ll figure that you’re supposed to be sniping at a distance or charging in, it keeps you on your toes throughout.

Unlocking powers is optional but never hidden away and you’ll want to find them as you progress through the story. Control is a brilliant example of how to lead a player to a challenge or reward without the need for hand holding too strongly or making the experience too linear. When you first find the Merry-go-round pony you can avoid the area but you’re not only clearly signposted to it when on a story mission but you get a similar “go check this” feeling that recurs throughout, that tug that encourages and rewards exploration. Even small little hidden areas that are hard to find typically result in a rare box with some crafting materials and another wonderful memo or tape recording to expand on a story you’ve pieced together.

It’s incredibly refreshing to have crafting and leveling that feel like necessary systems to support story progression rather than needless grinding for parts and power. Control even goes as far as to tie the need to get stronger with the need for Jessie to adapt to the new role as the Director of the FBC. Everything with the systems at play work into the narrative making it integral rather than an after thought for microtransactions (which thankfully aren’t there) Control just has that wondrous pick up and play combat that gets more fun the more you unlock. Before long you’ll be settling into favourite powers and tactics but the best thing about the diverse set of enemies is that you have to switch up those powers and tactics to deal with each situation differently. Control is always encouraging you to explore new ways of using combined gunplay and abilities.

There’s no denying that Control is really pushing the PS4 to its graphical limits. There is a lot going on and before the patch there were a few moments where teams against teams caused the framerate to take a massive hit. Thing is, I’ve gone back to those moments after the patch and it’s a hell of a lot smoother now. Typically I wouldn’t allow a game to have a pass on this but the patch was so close to launch it would have been a day one patch. The visuals are always stunning and explosions of concrete, wood and everything all gives The Oldest House and its contents a feeling of realism. If you go into an office space you’ll find them filled with desks, items, furniture and occasionally a working projector. Using powers to throw a mail cart through the office space and items go flying. Everything explodes into a shower of materials and items. It’s silky smooth, looks amazing and never stops being ridiculous fun. The projector continues playing on any surface regardless of how you throw it around and is something to experience firsthand. 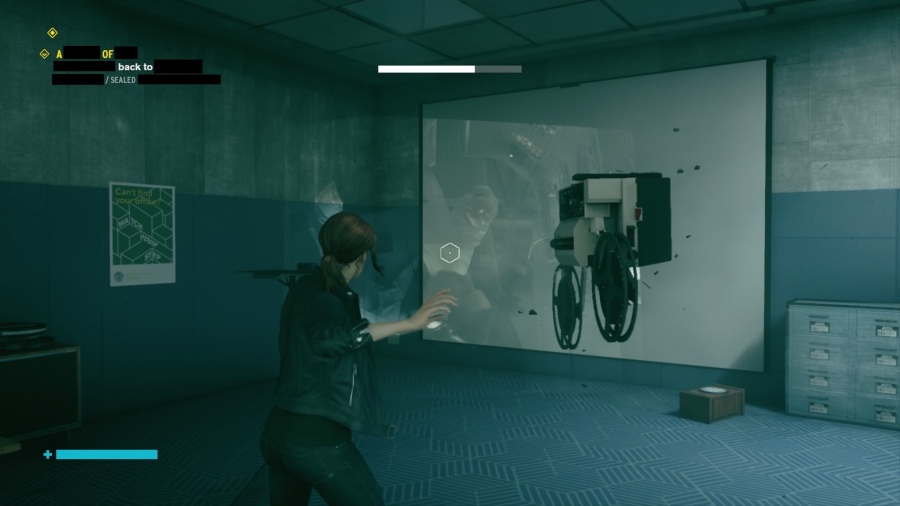 Control is also the first game I’ve ever played where the live action acting has added to the experience rather than detract. Even right up to the end of the closing credits, there are so many fantastically written and performed scenes that vary from silly explanations of the daily lives of agents in the FBC to really dark echos from the previous director. Sometimes these effects overlap and affect the game so much that you get drawn in even more. The overlapping allowing the two mediums to exist as one. It’s simply magnificent. In each new area you’re not only likely to find something fun and playful to mess around with but you’ll probably find something creepy, weird and bizarrely interesting to keep you look into the FBC that little bit more. Extra little moments such as episodes of the horribly bizarre kids TV show Threshold Kids that you find dotted around the Oldest House perfectly sum up how Control balances twisted weirdness with some fantastically dark humor and playfulness. 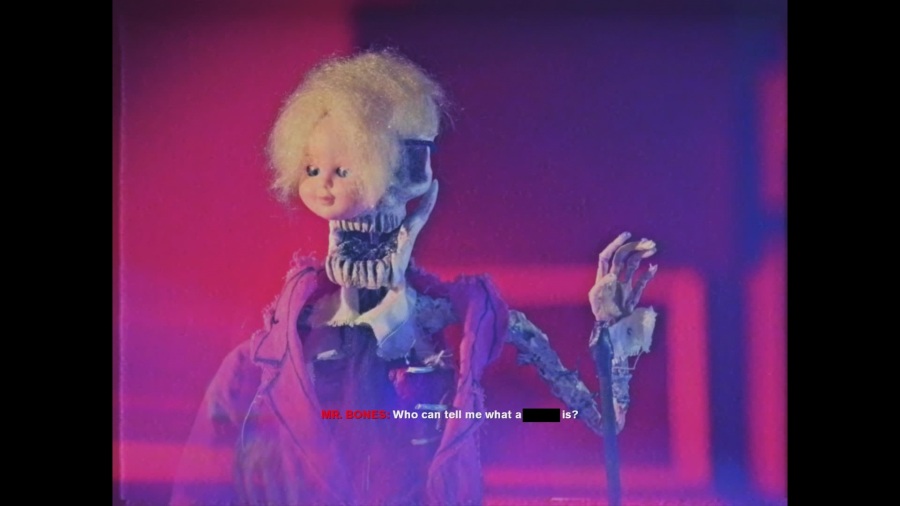 Really that’s where Control’s brilliance lies. If it was just weird or just a fun action platformer it would be average but when the two elements are so finely blended into a mix the results are fantastic. The story is plentiful and incredibly enjoyable. Each story mission takes its time to introduce you to the setup of where to go, opens with huge letters and ties into the narrative to have you breathing in the Oldest House as if you’ve been there for years. I’m not looking at Control with rose tinted glasses though as I do have some mixed feelings on the ending. On the one hand I wasn’t that happy that it hadn’t closed the book as expected but being placed back in after the credits had ended I realised something, I didn’t want it to end. I wanted to find more and finish off the extra little side quests I hadn’t bothered with and I was looking forward to the DLC to see what extra story content could be there. Looking forward to more content after a game has finished is definitely a strange sensation for me given how many titles do this to drag out the production but Control manages what most other games don’t. There is more than plenty of content to be had in the main game and anything extra is likely a bonus.

One of the biggest problems with reviewing Control is how best to describe the serious Wow-factor this title packs. There are so many moments where people on Twitter and social media excitedly posted while playing. Quickly posting various messages and reaction clips, “wow I just got to THAT moment and WOW” Thankfully they’ve kept most of those moments relatively secret for the betterment of people who haven’t gotten there yet but Control definitely has buckets of them. How to best describe a game with such magnificent music, stunning visual design, witty dark humor and phenomenal acting without mentioning [REDACTED]? Well you’ll just have to find out for yourself. I can’t recommend it enough.

Did you read? there were no adverts ? consider buying your old ElderlyGoose a Kofi?
Just click the link here https://ko-fi.com/A0A18JTG and good deed done!

I don’t run a Patreon because work I create ends up on the site and I fund the site myself so any money does directly go to the site to fund the web hosting and coffee!