It’s good to see so many unique and original ideas for video games returning to mainstream consoles. It feels like we’ve waited an age since the PS2 and DS glory days of experimental music rhythm games. Osu! Tatakae! Ouendan, Mad Maestro! and all of those delightful treats and ideas had slowly fizzled out with only niche Hatsune Miku and mainstream Guitar hero/Rock Band games filling the void. Now the Switch and recent bonanza of Indie titles has re-awakened the genre. Touch screen rhythm games, button rhythm games and various other mixed ideas that all feel like a nice return to those glory days that created legendary titles such as Gitaroo Man. With the return of mad music quirks in full force is Super Dodgeball Beats a stand out slam of awesome? Or is it just another skipped track that couldn’t dodge a wrench and should sit on the bench? 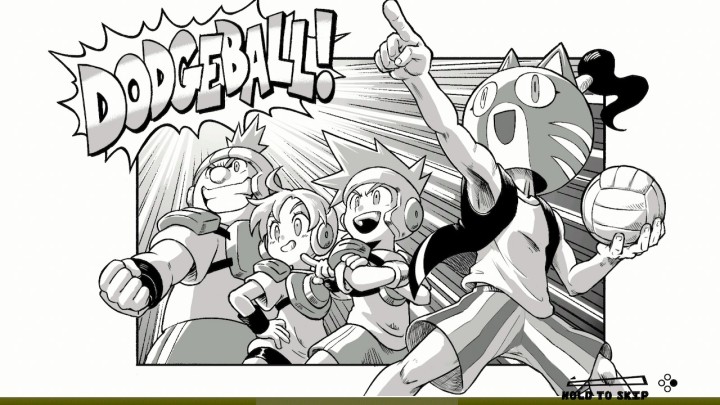 What is Super Dodgeball Beats? While on the surface appearing to be a sports game it’s actually a music rhythm game centered around a duel setting. Each team stands either side of the field with a player representing each of the face buttons. As rings constrict around each players position you must tap them just as they hit. This timing mechanic is fleshed out with some beats requiring the player to point and hold a direction on the analogue stick or hold buttons for a short time. When a ring is closing in each player has an animation to show it’s coming and for the most part everything functions well. The problems start occurring in later levels and difficulties where hold buttons and slides of the stick have different tempos (holding for considerably less or more time) You can start a stage with slow holds and switch to fast with no visual warning until you start the action and the animation simply moves faster or slower. This creates a level of trial and error in some of the later songs and this is before you get into the special attack powers. 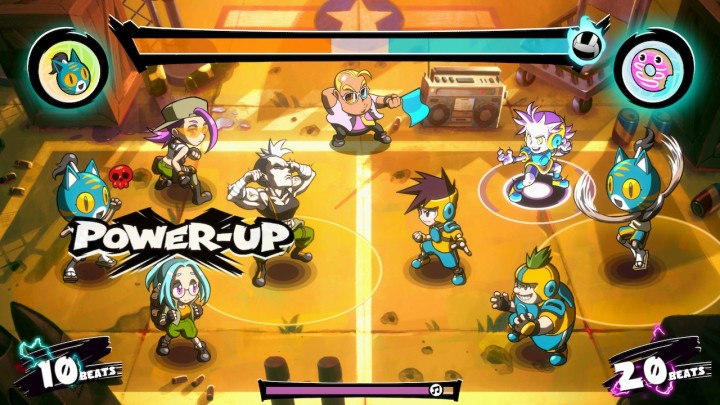 As you build up beat combos the ball will slowly slide to your side and you have to keep it in your side to win. To help you stop the opposition you have to build up your power-up bar and press the R button for attacks when charged. These attacks are random and you have to play through the game to unlock them. You won’t be hit with a poison strike by the Ai until you unlock it for yourself but you won’t unlock the power to counter it until a grind to get the next unlock. Often the power-up system results in a team attacking, building up momentum to slow or stop the opponent and making it incredibly difficult to recover. Some powers simply block your vision but others like the poison power stop you pressing certain buttons until it’s finished. On rookie difficulty there’s enough back and forth but as soon as you move onto Pro difficulty it feels like the Ai waits until you’re at the last part of the song (typically the most difficult section) to unleash the most annoying powers and steamroll to a quick cheap victory. 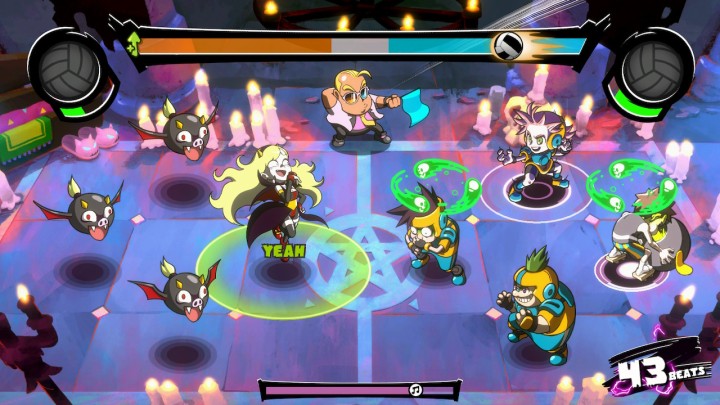 Super Dodgeball Beats does have a nice mix up to the usual music game singleplayer setup using the dodgeball setting to create a league each playthrough. Random songs are played and then when you win through those you move into a playoff setting. What this means is that you’ll play 8 stages at random leading to a quarter final, semi final and final track. Each of the playoff tracks are separate from the main roster of songs so although it appears you’ll be replaying the same teams as before; the songs and beats will be different. To play any of the songs in multiplayer you’ll need to unlock the teams, mascots, powers, songs and stages in singleplayer. The rookie league is worth playing at least once for the fantastic end credits. Super Dodgeball Beats does have a Multiplayer mode but sadly there’s only local multiplayer and it’s simple 1 vs 1. The same issues in gameplay occurred again with one player getting a lead and steamrolling to victory. It doesn’t matter how you play the game and what mode you’re in, it can just be too difficult to see everything going on and still hit the beats. 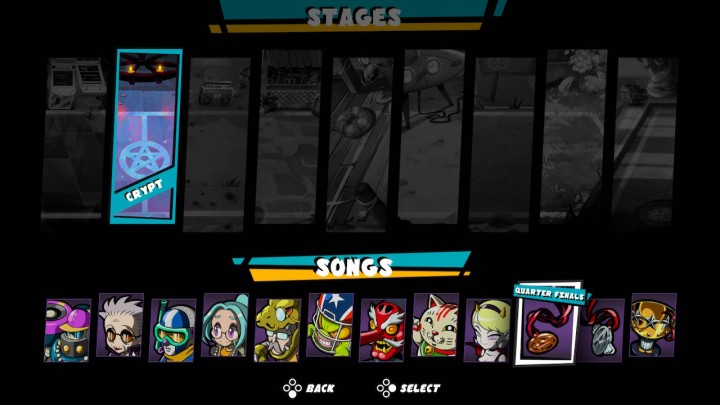 It’s bonkers that one of the main problems with Super Dodgeball Beats is a clustered visual presentation in the songs because visually I do love the style. It has this passionate manga madness streak running through everything with a lot of amazing high quality animation and drawings. All of the text is easy to read and the menus and screens all have a lot of care and attention to them. The winning bar, song progression bar and details of the stages clearly have a lot of care and craftsmanship in the animations. Everything should come together nicely, it’s just a shame that the beat rings are just too hard to read when everything is coming at you a million miles an hour. I’ve completed some Project Diva tracks on Extreme and yet I couldn’t keep up with the final Pro stages of Super Dodgeball Beats. Progression in the harder difficulty was slow with a lot of repeating the same track over and over to allow for when the Ai would throw out beat covering powers or completely remove two buttons entirely. 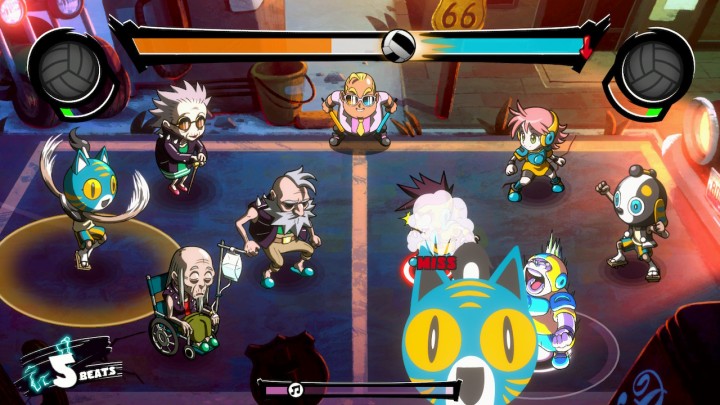 The winning element for a music rhythm game is its soundtrack and Super Dodgeball Beats has a good one. I wouldn’t go as far to say it’s going to blow your mind and there are a few tracks that feel like something you’ve heard elsewhere. Your enjoyment will largely depend on how much you enjoy 90s trance and bit-tune feeling music. It may not be entirely memorable but there is a lot of energy in every track and the flow can be fantastic when it comes together. It’s that sort of sound that everyone can enjoy and given how vibrant and energetic everything appears visually it’s a good choice. The memories of Osu! Tatakae! Ouendan do come flooding back with the first few hours of gameplay as the beats themselves sound more like cheers, leading your team to victory. The only catch to this of course is multiplayer where the same sound pressed by either player sound identical and a miss can completely throw your rhythm. 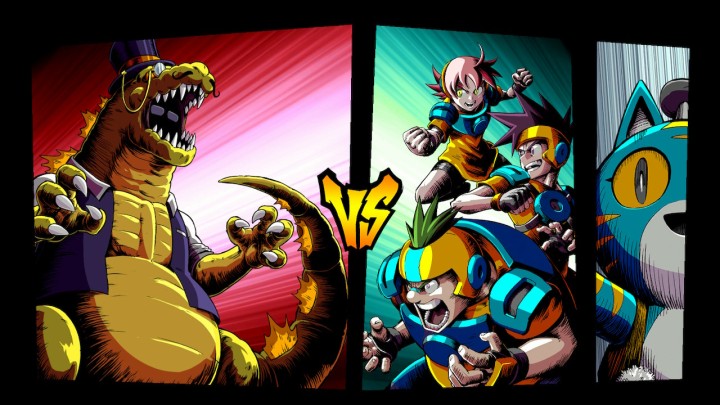 Aside from the singleplayer Tournament mode and Multiplayer there’s training allowing you to replay previous songs and that’s it for Super Dodgeball Beats. Hitting a chain of beats, unlocking powers and finding the dancing referee an animated delight are all great things. To start out with it’s a nice title that feels like it’s trying something new. I was enjoying everything so much until I started unlocking power-ups that felt cheap, difficulties that were needlessly frustrating and started getting graded poorly on songs simply due to being hit with a power-up. Super Dodgeball Beats at its core can be good fun but it’s let down by a soundtrack that doesn’t have a really memorable hit song and gameplay that’s sorely lack any balance. You’re just as likely to have fun as you are to give up in frustration. It’s such good fun to begin with but constantly frustrates as you get further. That first rush is a brilliant beat and it’s super frustrating that the gameplay just isn’t quite there yet.

5/10 – A skipped beat but potential for better

Want to see how hectic Super Dodgeball Beats can be?
See for yourself! Although a quick warning, it’s quite loud!

Did you like what you saw? Did you enjoy the fact there were no adverts for your adblocker to deal with? Maybe consider buying your old pal ElderlyGoose a Kofi?
Just click the link here https://ko-fi.com/A0A18JTG and for £3 consider yourself sorted for one good deed done for the day!