As with other mobile apps and “live services” these games are designed to be updated and drastically changed as they go along, with that in mind this review is of the core experience from its launch and into the first month of release (August-September 2019).

I think I’ve finally reached a point of self awareness with Pokemon where I no longer have any sort of qualms about going out of my way to get a plastic Psyduck toy from a McDonalds Happy Meal or a Bulbasaur Trading Card Game tin just because I like the thing. I’ve resigned myself to the fact that I will inevitably play Pokemon Sword at some point and despite being completely burnt out on Pokemon Go I still find myself firing it up occasionally to send out gifts and catch whatever random gen1s I can find in my area. With this context and love for the pocket monster in place I dived into Pokemon Masters. I loaded the app with a heavy expectation for a gacha nightmare but that isn’t exactly what I got. 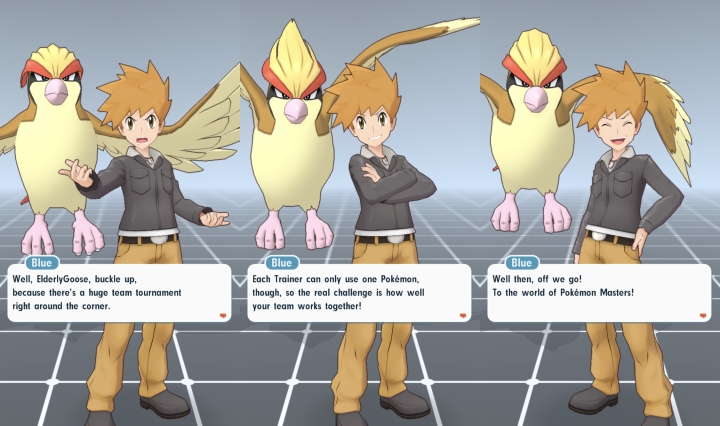 Pokemon Masters is a free to play mobile game so right from the start you expect a monetization moment to occur where the game either locks up and stops letting you play or becomes impossible unless you put in X many £s, this is surprisingly one of Pokemon Masters strengths as neither of those things ever happen. You can only use real money to buy Gems and you can only use Gems to summon a random Pokemon trainer (and their single main Pokemon) You can also collect Gems through daily missions, completing the main story, sync pair stories, events and the first time completing each training area. A summon will cost you 300 gems and you’ll usually find an hour or so of play results in one free summon until you reach the end game content. The chances of collecting a high star/quality trainer are still ludicrously low as is the case with most gacha style titles but you’ll find plenty of 4 star trainers are incredibly powered and 3 star can use moves to buff themselves to that level as well.

To confuse matters there are gems that you unlock through playing the game and paid gems. Both are in the same gem total (not separate items) but only paid gems can be used to purchase a daily discounted summon of 100 gems (99p of gems) This makes sense for free to play games, hook the player in and use a discount to make the purchase seem affordable or a bargain. If you get a duplicate (because of course there are duplicates) you simply boost that existing trainers sync super move. As a result of the gacha nature of summoning you will find yourself boosting lower Pokemon you rarely use because they are common summons. This in turn would encourage spending for a better Pokemon but the discounted rate is only once daily and the £ to gems costs are ridiculous. Pokemon Masters doesn’t do anything new and exciting with the gacha model of playing daily for new summons it just treads lightly on a line well worn by 101 other mobile games.

It’s not all horrible attempts to get rich off players though. Pokemon Masters is absolutely chock full of great content if you’re lucky enough to reach it. The story is surprisingly interesting following your trainer as they befriend various well known characters from the series. You will get to deal with a new Team Rocket stand in and progress all the way up through the island gyms to the PML (which is really hard to read as Pokemon Master League) You start out with just your very limited customised trainer with a Pikachu and start collecting other people as you progress, starting with Brock and his Onxy and Misty with her Starmie. After a few summons from free gems, trainers and gym leaders who decide to tag along you’ll start to notice a pattern. Masters all tend to have final evolution Pokemon and there’s a reason for that. The focus isn’t on collecting evolution gems to power up Pokemon it’s in the grind to improve Pokemon levels, level limits and skills. 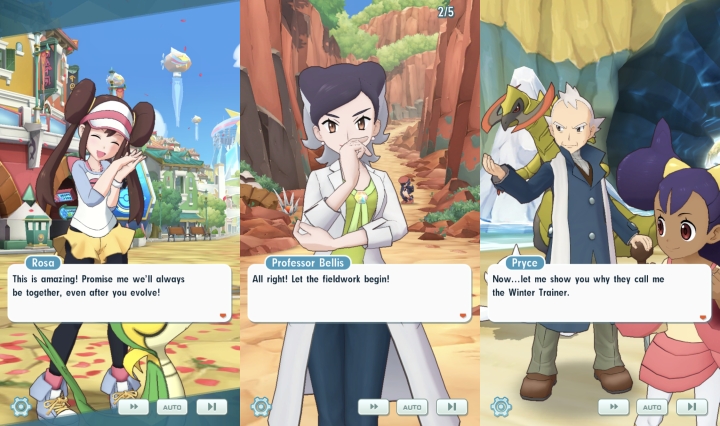 To understand the grind we need to talk about the combat. In true Pokemon style the combat is turn based but less in a classic waiting system and more like the active time battle systems from Final Fantasy. Your move bar slowly fills and you can either tap on a button to use an item or a skill to use the number of filled move bars to activate that Pokemon’s attack. The battles take place with 3 vs 3 and you can target opposing Pokemon by tapping on them. There are 1 on 1 battles but these only occur for evolution battles that you unlock for very few trainers and even these are only unlock by leveling up and exchanging evolution shards (thankfully only spent when you successfully complete a battle) Once you use enough moves you’ll unlock a sync special move that shows a short flashy animation and does large amounts of damage and sometimes buffs. It’s nice to see Mega Evolutions making the occasional return this way and adds strategy to the combat that still has me playing this daily since it launched. “What about the grind?”, I hear you ask. Well each Pokemon only starts out at level 1 with 2 moves.

The difficulty curve is sharp and wobbly and you’ll find yourself grinding at the combat using the AUTO ai to just deal with battles by itself to collect Strike, Tech and Support items that are used to unlock level limits, learn passive skills, active skills and boost-level some Pokemon. The option to speed up the combat helps with the repetition and the AUTO Ai sets it to max speed. The problem with this grind and curve is that each time you’ll be getting into the story there will be an encounter with a type of Pokemon that is weak to a different one to your team and it’s back to the pool of people to level up, unlock the limit and grind up to the same as everyone else. The training area thankfully has multiple repeatable battles which rewards you for everything you need but yes each item has a bronze, silver and gold version because there needed to be even more grind. There is something enjoyable in bringing Pokemon up to muster but it’s a grind that only gets easier if you luck out with your summons and you get a decent 4/5 star Pokemon early on to power though. The level-limits start out at 30 bronze but get to 200 bronze, 150 silver and 30 gold quickly, this is collected in around 3-4 repeats of a “very hard” challenge but after a few Pokemon this becomes a bit tedious.

All of these constant niggles about grinding for items, coins and junk really is a shame because it cannot be understated the writing and presentation in Pokemon Masters is masterful. Every single summon has a unique sync pair story and although they present you with multiple choice options that all lead the same way, the writing makes it enjoyable to play. There are levels where you explore a path stopping to swipe the camera to look around and tap on extra items and NPCs going about their day. The music is of a quality you’d expect with Pokemon and the visuals although suited to all mobiles pop nicely with animations to match. The online coop battles only unlock once the main story is finished but they do add in a new challenge. It’s refreshing that if you cannot find enough people AI controlled NPCs step in (and they don’t suck!) These challenges are ridiculously unbalanced but they are all about overcoming challenging AI teams with real people. The additional Gear system unlocked at the end game adds very little to the experience and the focus is more on your toughest moves and stats. The online experience is not that great but it is fun. 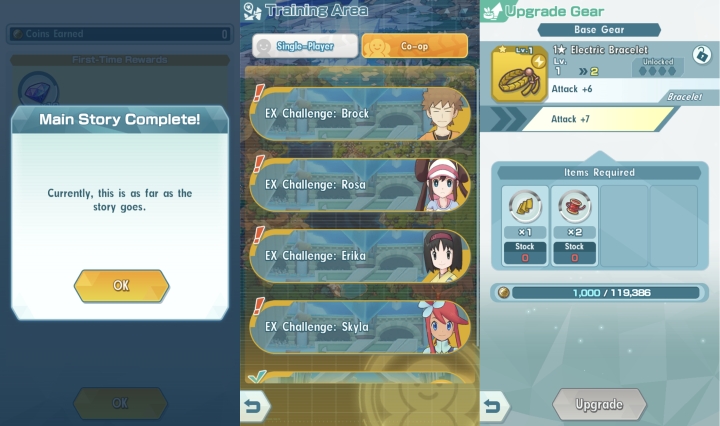 Clicker and AFK games have never made much sense to me. I’ve played Egg Inc, Ragnarok Clicker and a few other similar titles and these games tend to reach a plateau where the time and effort doesn’t reflect the reward. Pokemon Masters reaches that same feeling of “why am I doing this?” when the grind kicks in but there is a strange cathartic feeling that comes from leveling up of your Pokemon that never entirely goes away. The main story isn’t finished yet and cuts out at a really frustrating point but what’s already there is enjoyable. I can’t help but feel that it’s a shame Pokemon Masters never stops being such a grindfest. There’s plenty of content to enjoy here but there are slightly more caveats than recommendations and it never starts being a must play super enjoyable experience, forever in the middle ground of mediocrity and yet I still can’t stop bloody playing the thing. Just one more challenge and I’ll stop. 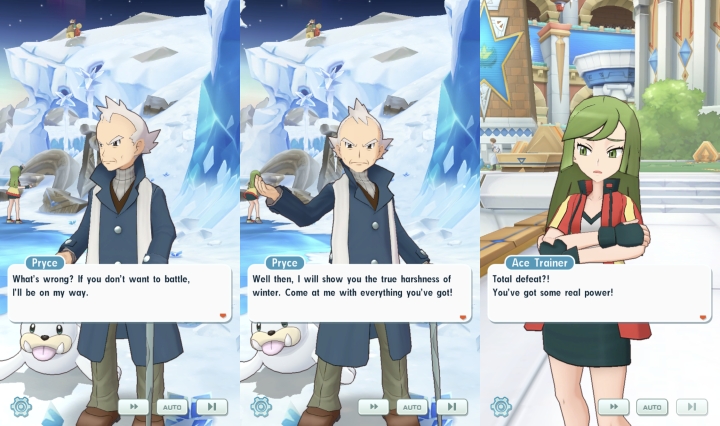