The swords gleam in the twilight,

The air blows softly through the grass,

Why am I starting this review a little differently to usual? Because Samurai Showdown is a very different kind of fighting game.

If you’ve never played The Last Blade 2 and only recognise main guy Haohmaru from Capcom vs SNK crossovers you’re going to be in for a shock to the system here. The gameplay is less about flashy combos and a lot more about perfect insanely damaging counters. There’s a lot more one punch man style insanely damaging single moves than remembering 21 button combos and everything is tooled or geared for that one sweet spot where you disarm your opponent and slice through them (quite literally if it’s the last hit) 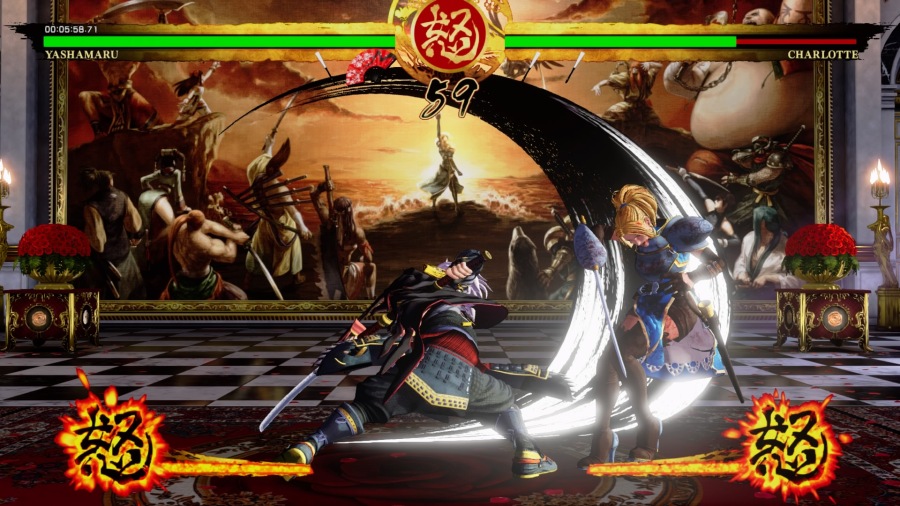 Samurai Showdown does follow a few basic tropes for fighting games. You’ve your typical 2D fighter controls for blocking, light attack, medium attack, heavy attack and kick buttons to work with. You can do half crescent moves and an attack to do a character special special move. Samurai Showdown breaks the mold by adding in an evade button that when timed with a fireball motion disarms an attacking opponent. That Kashing! noise on a successful disarm is fantastic and the opponent can reclaim their weapon but they’re stuck with fists and taking more damage until they do. There’s also the max rage system which allowed you to burn all of your special meter on one instant dash based incredibly powerful move. There’s even an optional super you can only use once per match and an alternative character specific meter super. The best thing about Samurai Showdowns systems is that you’ve a lot of tools to dispense incredible levels of damage but it’s all so simple to use you’ll find it comes quite naturally.

What’s surprising is that Samurai Showdown is a fighting game that’s more geared towards solo play. There are your ranked mode, casual rooms with team vs and single and training modes for online multiplayer but for offline play there’s a Story mode for each character, survival mode and essentially an arcade mode in all but name. The most interestingly unique addition is a ghost mode. Ghosts are Ai opponents that use other random players data to fight as they would, this is the theory but in practice it makes for a frantic and often sporadic Ai that throws out moves all over. It’s all very quirky and messy but that’s half the fun in Samurai Showdown, finding what works and using it to crush the opponent. 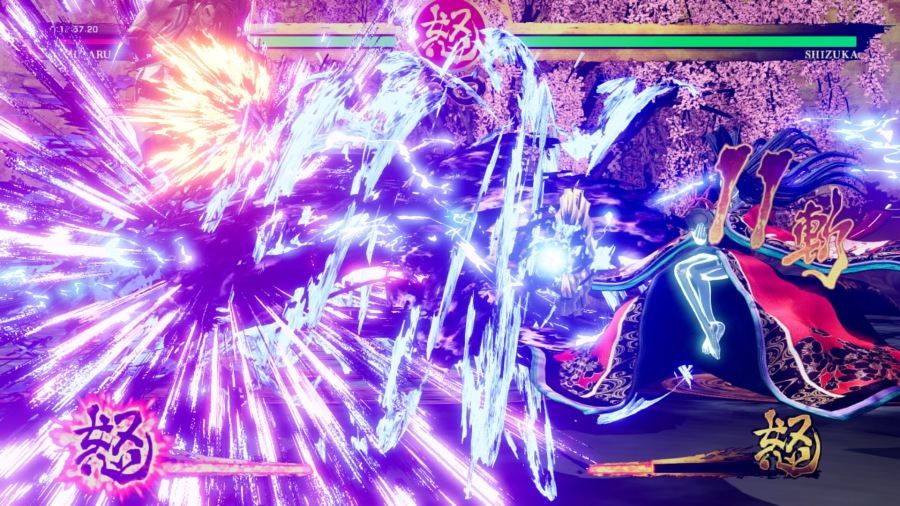 Visually Samurai Showdown is stunning. It has this overall Street Fighter 4 inked vibe throughout that boosts the anime looking visuals to make the character models less cartoony and more like a stylised Japanese print. It’s gory and brutal, there is an option to remove the blood and such but by default you can expect characters to be covered from head to toe in jam before the end of a duel. All of the artwork for menus and story has a rich traditional Japanese theme and feel, from the little frog with the leaf when saving to the detailed artwork for the story. Almost everything except fighting dialogue has been translated and the subtitles are clear and easy to read. 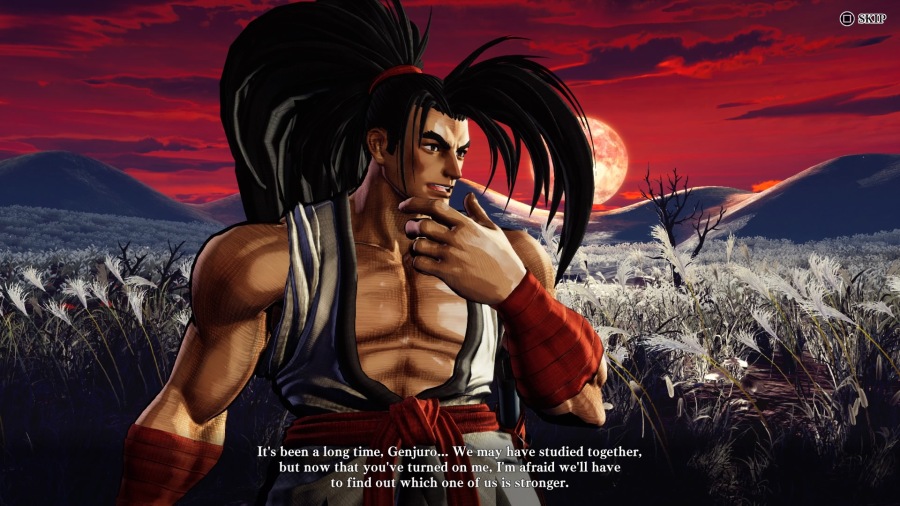 Given how everything looks the part; I’m happy to report that the audio is up to just as high a standard. From the sounds of swords to the soundtrack and everything in between, the quality and commitment to a Japanese traditional theme is staggering. Voicework is fantastic with familiar lines from the more recognised characters from the series and everything is told with a little surreal lightness that overlooks the fact you can slice opponents in two. The exclamations of pain are the usual fighter affair and thankfully that makes the brawls a lot lighter than they visually appear. A bit like how in Mortal Kombat the fights can go on despite a fighter having their spine broken in multiple places.

There’s plenty to take away from Samurai Showdown both in its unique combat and from the wealth of single player content. It’s a fighting game with very different focus on how to win and a greater emphasis on psyching your opponent for an opportunity to do crushing damage but there lies its enjoyably different gameplay. This does make the ludicrously overpowered and slightly cheating Story mode boss feel cheap and a bit of a misstep. It doesn’t do Samurai Showdown any favours nor does having great netcode  but having sadly quiet online with fights a rarity in the UK and it’s only going to get worse as time goes on. Regardless there’s enough single player content to enjoy and I know I’m looking forward to seeing it at EVO this year and what Pro players do with the systems at hand. 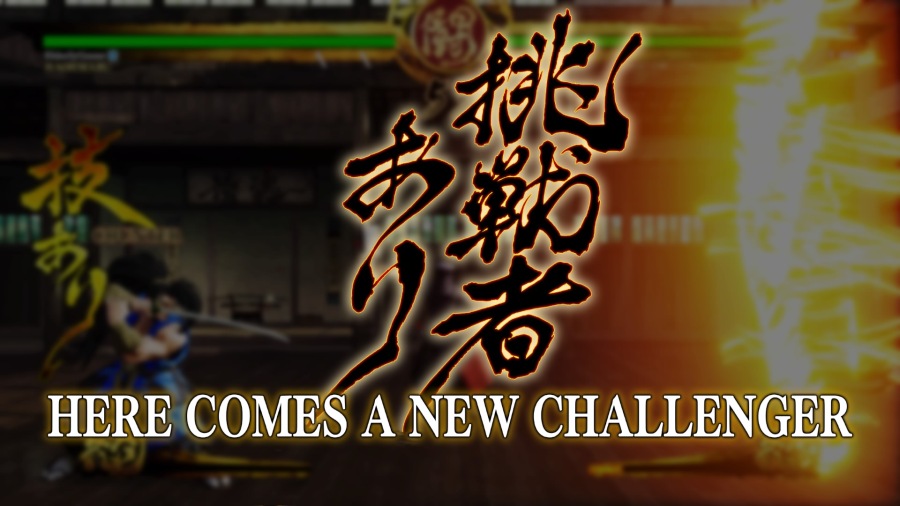 When you weigh up its worth Samurai Showdown comes down to how much you’ve enjoyed other previous SNK unique fighters. If you just want to fast combo through every battle then probably this isn’t the fighting game for you, however if you’re very good at finding that perfect moment then this is the game for you. It’s the traditional Japanese styled fighter that stands strong on the battlefield. It’s just a shame it does so alone waiting for more support.

8/10 – cutting through the competition

Did you like what you read? Did you enjoy the fact there were no adverts for your adblocker to deal with? Maybe consider buying your old pal ElderlyGoose a Kofi?
Just click the link here https://ko-fi.com/A0A18JTG and consider yourself sorted for one good deed done for the day!