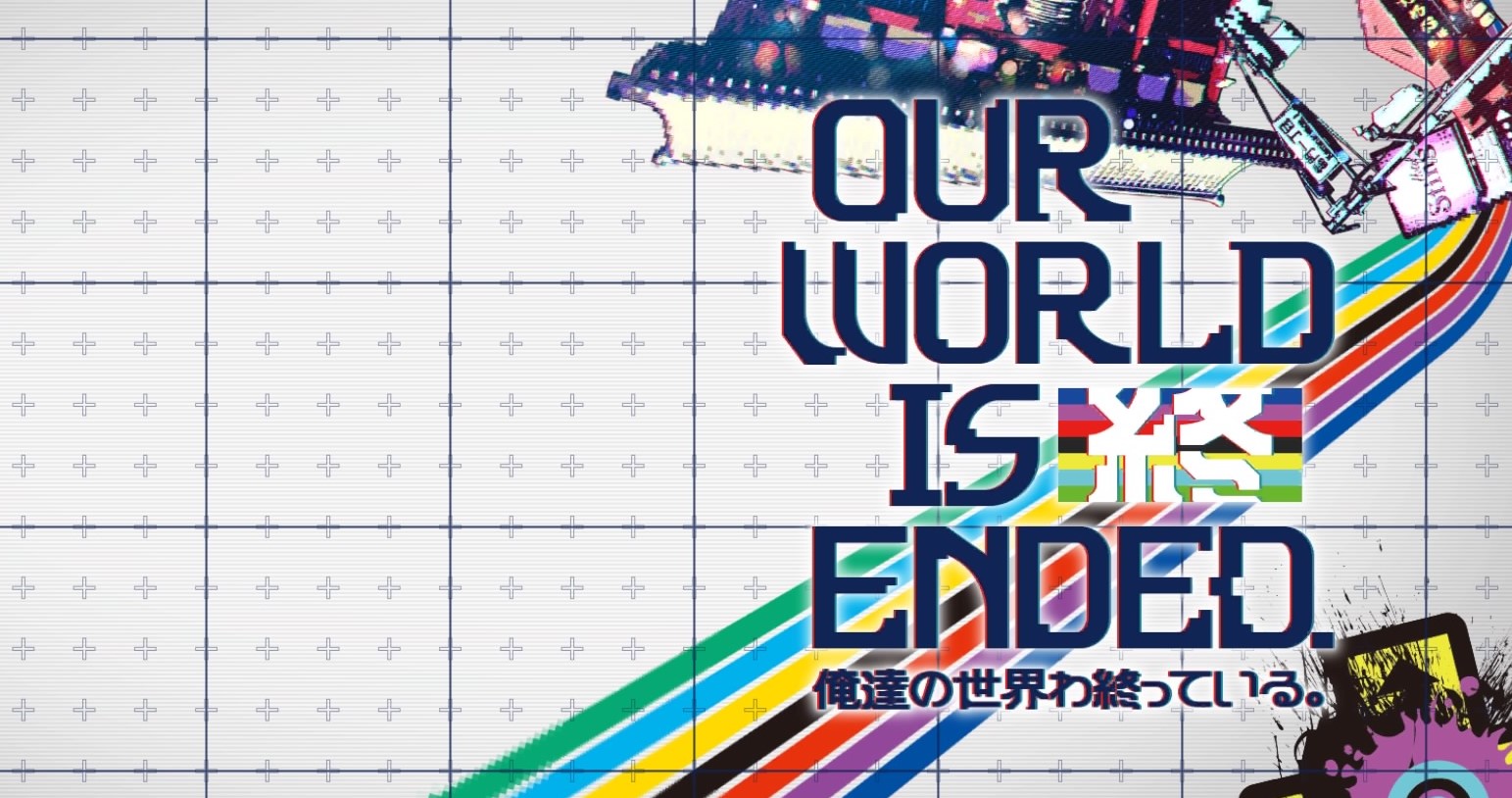 Sometimes you’re in the mood for a visual novel. Something twisted, clever and new. There can be great moments where you’ll be completely blindsided by something that makes you sit up and pay attention even when you least expected it. Visual novels are definitely a genre I’d never expect to love as much as I have in the last few years. Danganronpa and the Nonary Games really have a lot to answer for. One glimpse of the funky Persona-like trailer for Our World Is Ended and I was sold. It looked new, colourful, clever and there was something twisted that I just had to find out about.

The more I played of Our World Is Ended the more I realised that this review would need a different opinion for balance, this was clearly a different game to how I perceived it at launch (I’ve checked and a few others agree), so I thought I’d get a consult from the fictional character Todd from TV series Scrubs.

Todd: Sometimes you’re in the mood for boobs you know? When you see a videogame you always have to think, Stop. Is the story is going to get in the way of dating someone or something? Life is too short for worrying about consequences and people’s feelings unless it involves passing a flag to get that sexy image of them in a swimsuit!

After a few hours with Our World Is Ended I realised this was not the game I thought it was. Every time the story starts to make progress and some interesting decisions need to be made you can bet that a few seconds later there’s an ero-game moment ready and waiting. Plenty of poor taste jokes about breasts later and you’re past caring about what little story there is. The systems at work are your standard visual novel affair, you’ll be occasionally asked an answer to a question which works as a flag to which character you like more and you can skip previously seen text or auto play the text or hide it completely. There is an interesting mechanic called Selection of soul where the dialogue options fly across the screen and you have to chance your bets and pick one, assuming you didn’t quicksave first to redo the option. Quick save is L1 and Quick load is R1 so don’t worry if you miss anything, chances are you saved earlier and can go back.

Todd: The first encounter with World Change mode is when I knew this game was for me. Yuno in a swimsuit within the first hour of gameplay? *internet high-five* There are a few other women in the game and some are nicer looking than others but thankfully the gaming gods even remembered to give the drunk Asano an obsession with having small boobs so she could wish for bigger ones and have a great moment later on. Pro-tip dog, hide that text every scene for maximum boobage.

Visually Our World Is Ended is so frustrating. It’s incredibly well drawn and the menus and simple animations are ridiculously well made. This game has some real talent at work visually and I would adore playing any game they work on in future. It’s just a shame they were lassoed to an ero-game that’s not sure if it wants to be seriously messed up or just seriously lewd. The text is nice and easy to read which is good because with it being a visual novel you’re going to be reading a lot. I seriously can’t drop how well made the systems at work here are and even the options menu looks like a real labour of love. It’s a real shame that the Options menu, drawings and UI are the games strongest point.

Todd: The artwork here really is awesome. Who wouldn’t want to see people in swimsuits without waiting for the swimsuit special spin-off episode? So many curves and boobs here, no nips or ass but the boobage on display is *chefs kiss* You even get to see some naked man boobage to but strangely they seem to be missing their nipples? Sure there’s occasionally a story about an alternate reality and a world that maps itself onto ours but don’t worry about it too much, Our World Is Ended doesn’t! It gets back to the lewds quickly every time things get too serious. It helps that the game keeps track of which girl is your number 1 but sometimes your number 2 will just be someone you helped out hoping to see more lewds but turns out they were part of the plot.

I knew there were a lot of familiar voices at work with Our World Is Ended and the work they’ve put in is incredible. The script they had to work with is mostly garbage and every line of dialogue feels like it will follow 4-5 paragraphs of the characters reacting but the amount of voiced lines is still surprising given how large the game is. Their commitment to the roles (being what they are) is impressive as well. The music starts off as catchy non-offensive background jams but the longer you play the more you start to recognise when the story is coming off the rails as the same ‘comedy’ music starts to play all over again. Thankfully there aren’t any annoying sounds and getting through the text is easy enough, it’s just a shame there’s so much of it.

Todd: I never get tired of hearing a boob make that paffu noise. You know? When they squeeze in close and you hear it against your arm like a bouncing air balloon! When you get to the character Erorie saying how, “pleasure is exciting” I thought I was going to lose it! There are plenty of kyaaa and reactions that you’d expect when a hot jumper wearing errand boy successfully saves the day! The inclusion of a tentacle monster is just what this game needed to notch it up another level amirite? Hell yeah!

Our World Is Ended is so ludicrously long for a visual novel. The best kind of visual novel (or indeed any novel) is one that you can read and be surprised at how long you’ve been reading it, this is not one of those. Every time I felt like I was making progress or it felt like an end to a chapter was coming another ludicrous scene would come out of nowhere and be stretched out to no end. This constant stretching is not for the characters development either. Most of the nonsense can be pointless with characters describing a door in text that you can see from the artwork. A typical chapter will have a story element, a lewd moment, a pointless scene where nothing happens, another lewd moment, another pointless scene and then maybe the story might pick up if your lucky. A character runs around the Asakusa so many times you’ll be shouting at the TV to just get on with it and this keeps happening far too often.

Todd: What’s better than boobs? More boobs! Our World Is Ended never tries too hard to make you think about the characters that are facing these strange events too long. You’ll be learning how many words for breasts, mammarys, bazingas, jugs and cups there can be! What better way to brush up on how to smooze your lonely co-workers than taking them to buy groceries? Helping clean the rooms or just look at forums online? If they live at the office that’s even better! No reason to question that! Just more naughty nightie accidents! No butts, no legs, no curves, just give me all this wonderous bs!

Our World Is Ended (I keep wanting to call it Our World Has Ended) is clearly trying to do something different but it’s too busy trying to appeal to a very different market and failing to make anything enjoyable. If it had an editor that wasn’t afraid to cut out swathes of text, a writer who could look past a womans boobs for more than a token characterization and a story that didn’t rely heavily on the worst kind of humor it really would have had something to recommend. If you ever want a case design in how to make an interesting menu systems? I suppose Our World Is Ended is good for that.

Todd: Our World Is Ended (I want to keep calling it Our World Is Bouncy!) is clearly written by someone who wants to get girls. My girl Yuno is called Airhead Assistant for a reason! Although I’d totally settle for Girl A if I had a chance, although Yuki could be my sweet something something, oh and then I could always get Miyabi to service me if you know what I mean! The best mammaries!

Hey did you like what you read? Did you enjoy the fact there were no adverts for your adblocker to deal with? Maybe consider buying your old pal ElderlyGoose a Kofi? Just click the link here https://ko-fi.com/A0A18JTG and consider yourself sorted for one good deed done for the day!
I don’t run a Patreon because all the work I create ends up on the site in one way or another and I fund the site myself so any money does directly go to the site to fund the web hosting and such, anything left over will go on games and coffee!