I have to admit; Atelier Rorona – The Alchemist of Arland DX totally blew me away (check out my review of it here) and left me more than excited to jump into Atelier Totori, the 2nd part of the Atelier Arland trilogy of games. Totori is set after the events of Rorona and not only includes the original cast but a new set of characters, locations and mechanics. Are we looking at the best kind of sequel where it dials up everything good or the awkward middle of a trilogy that doesn’t quite get it?

The core loop hasn’t changed much from Atelier Rorona and this isn’t such a bad thing. Explore the world, harvest items, kill monsters in a very basic turn based combat system and then use alchemy to blend items together for various combat tools, quests and requests. As you do all of these steps you’ll level up your party and try to make sure you don’t overdo too much on one task and miss something because the time system is back and with gusto. The harvesting and combat now takes time as well as travelling between areas and although this starts off being a pressing worry, it’s quickly forgettable and just results in more time management. Your main reason for progressing is to upgrade your adventure licence by hitting trophy/achievement like conditions throughout and reporting back to the main government desk.

Atelier Totori doesn’t set out on its strongest foot. The start of the story is very slow, very grindy and sets you out into the world without any clear purpose of what you’re really supposed to be doing. It doesn’t introduce the adventure licence until you’ve cleared a lot of tasks and this does match the main character Totori’s lack of focus but it could really have needed some better pacing. The addition of the more likable new characters turning up faster and not feeling quite so random would have also helped. Skills are not primarily unlocked through leveling up either and you’ll find yourself curious as to why certain characters never learn any until you complete side quests that aren’t particularly well sign posted. Exploring levels no longer unlocks the next path to a new area, these are arbitrarily unlocked from leveling up your adventure licence or through side quests making them feel more a game of chance than naturally achievable.

Visually Totori is a PS3 game with enough polish and buffing that it fits nicely on the Switch. The text can be a little difficult to read at times when the Switch is docked and the UI is a step back from Atelier Rorona being a lot more fiddly and clunky when finding specific items and notes. Totori’s memo for example is buried in 3 menu options and is the only place to find out which side quests you have ongoing. The “sexy” character outfits are dialed up a bit too far into ludicrous levels again. This is mainly for the 3D models which is strange as the 2D artwork isn’t that bad (although opening the dressing room for the first time sets the tone). The animation for Melvia’s special axe attack has her flashing her arse making little sense other than repeated fan service as it’s the most useful attack early on. It’s just a little disappointing as the artwork is of a very high quality throughout and doesn’t always blend well.

There is one thing Totori really nails though and that’s the audio. The work created here is fantastic. The dub is surprisingly enjoyable and the Japanese voice work is great. At times despite its mediocre script and pacing the voice actors are able to elevate the feeling in moments above how they read in text. The sound effects are well crafted and fit without anything annoying or out of place, giving cues for menu opens and item selecting and as with Atelier Rorona the music is largely delightful without being overbearing. You’ll find yourself humming tracks from it and the loop for each area is long enough to not get old, despite having to repeatedly retrace your steps.

The biggest failing in Totori is its pacing and heavy reliance on the player to drive the story without being told what the story is or even given much of a clue where to start looking for one. Too much is left for the player to “know” in bizarre design logic and not nearly enough signposts to help them get ready for key plot points. Totori quickly becomes obvious that it has been designed for multiple playthroughs and rather unfairly defaults easily to one of the “bad endings” which makes the experience ludicrously frustrating. A few times during Totori I’ve completed an important moment, watched a well made cutscene and expected a cut to the credits only for there to be more content. That would be welcome but with a ticking clock your continuously risking another bad ending by not completing everything and the extensions bring dread rather than excitement.

Atelier Totori is such an odd game that despite being well crafted with a lot of content on offer it comes with a lot of caveats. There are more items and exploring but some items aren’t listed on the map. There are more characters but I completely missed one on my first play through because I didn’t visit a place by a set time. There is story that at times hints at brilliant moments but it’s watered and hidden in obscurity throughout. I’ve seen all of its endings and I have to say that barely one of them was as enjoyable as the journey to get there. Its relaxed attitude is so relaxed that it forgot to put in any structure or signs along the way and yet you still feel like it’s good to hang around with. 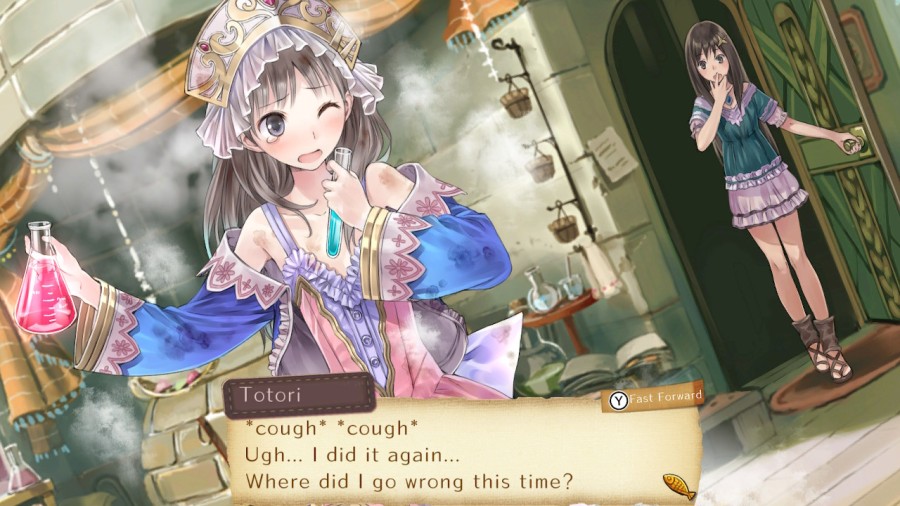