Experience Opinions posts are where I have a look at a beta period of an up and coming title and let you know my views/opinions of what happened.

Remember the E3 trailer for Jump Force? The one which ended with Light and Ryuk from Deathnote looking down as the current best known trio of Naruto, Goku and Luffy (your typical Shonen Jump fighters) went nuts and everything burned or blown up, it was a hell of a wild ride. Both the hype and the disappointment exploded into a strange Marmite like paste. It’s a step out of the norm for Jump as well, every few years we get a Shonen Jump fighter which typically throws together unique and interesting mechanics with a very simple anime style into a blender to see what fits and it seems this title is throwing the art style and setting in to for good measure. I must say although I don’t like the look of the smoothie results it definitely tastes better than it looks and it’s likely pretty healthy for the franchise as well.

Long ass loading times are not a great start, nor was trying to get into a very crowded server. For an open beta, Jump Force felt at times like the Dragonball FighterZ beta where joining the lobby was the first hurdle to trying any of the game. The option to pick from 8 different pre-made avatar characters is a good start although it’s a shame the default characters were generic looking dudes and ridiculous outfits for the woman. It does still bode well for character customisation options in the full release.

For a huge lobby it’s bizarrely sparse. Essentially Jump Force’s lobby has a similar problem to most MMO games where the proportions of the hub are extreme to allow freedom of movement and choice but all it causes are large clusters of people all trying to get around 1 NPC. Thankfully there are 4 NPCs for online battles and you can walk through other players, it does look visually clustered though and although there were a few other NPCs around they weren’t doing anything in the demo (or were fighters just throwing out single lines of dialogue). It’s always a welcome surprise to have the option to play Vs the CPU in any fighting beta test and this one was a definite necessity.

The bulk of my time with the Jump Force beta was fighting the CPU but that’s not particularly bad. It resulted in time to get to grips with a lot of the game before getting out online and making the most of the fights. There were also a huge number of fighters to use. I know it’s a cluttered roster of different franchises but it’s a shame we didn’t have any of the big female hitters in the beta, I’d have loved to use an entire Team 7 roster with Sakura leading Sasuke and Naruto but again this is Shonen so it’s going to have a different focus to fans. It is a 3vs3 tag fighter so the addition of a large unique roster is going to help, even if it comes at the cost of a heavily spoilerific setup for some characters and their move-sets (I’m looking at you Bleach)

The most important aspect of Jump Force (and any fighter) is the combat and controls  and these are absolutely fantastic, feeling super tight and satisfying. Everything has a function and although there is the typical “every button does something” that most tag fighters have, it’s pretty intuitive. Square is your basic attack, mashing it gives you a simple combo and it’s cool how Goku has his trademark punches and kicks but Naruto will shadow clone into combos and each character has a very different feel. Triangle is your heavy attack and it’s really easy to chain light into heavy or use it to counter an obvious attack. Circle is interestingly assigned to throw and these are worth doing just for the visuals that accompany them. X is simply jump but with R1 held you can side dash and as with other 3D fighters you’ll be doing that a lot. R1 is your block button but tapping at the right time seems to parry attacks. R2 has a Dragonball Budokai style system where holding it charges your super gauge and pressing it with any face button unleashes a super (it thankfully shows you in the bottom corner of the screen which does what) L1 does a chase down attack that feels like every Dragonball game’s rush attack and essentially helps you chase down opponents who are projectile spam heavy. Holding L2 brings in your next teammate’s tag attack but if you tap it the character will zoom into battle attacking your opponent and you only take control when they land. It is a fantastic system which is surprisingly easy to pick up and let’s tag combos happen easily.

Visually Jump Force is something else. The game feels most like Naruto Storm 4 and is visually just as shocking. They’ve clearly learnt from Dragonball FighterZ with characters rushing to clash at the start, a short intro from your main and then getting into it. There are clashes of swords that are stunning little pockets of particles and colour with a proper Soul Caliber style explosion to it. Super moves look phenomenal with attacks such as Goku’s Spirit Bomb being genuinely intimidating. The stage damage from each attack maybe superficial to the combat (moving through broken rubble as if it weren’t there) but it all adds up to a stunning concoction of particles, lights and colour. The fact you can fight against the same character and they will have the same colour is a bit of a oversite but the action is so fast you’ll keep track without issue.

The netcode for matchmaking was not great. Every attempt it made to matchmaking was almost over before it even started. There was a training mode to use between matches but after 5 seconds it would give up matchmaking and kick back to the lobby (or occasionally the title) I did manage a few fights and playing against a human with a little latency is very different to an Ai. A lot more focus is placed on what range will hit and how they will balance their team to attack. Also the lack of a “best of 3” victory system was criminal kicking you back to matchmaking after each fight and let us hope that gets patched in.

The music and voice acting is a little on the terrible side. Far too many of the Japanese cast are clearly just screaming into a mic and hoping for the best. Some characters lip syncing is non-existent which doesn’t help matters even if the subtitles are large and easy to read. The sound effects, blasts and explosions are bombastic though and almost make up for the odd slip in quality. This is only a limited cast of the full roster though and we’ll see how this progresses as the game expands.

Overall Jump Force has definitely surprised me and I feel given how many people were playing the beta a lot of others were surprised at how good it feels to play. It has such an odd Marmite style in screenshots causing just as many people to love it as hate it but when you get the game in motion and you’re throwing out super sword slicing badass moves which don’t slow the combat then you know you’ve got a gem on your hands. 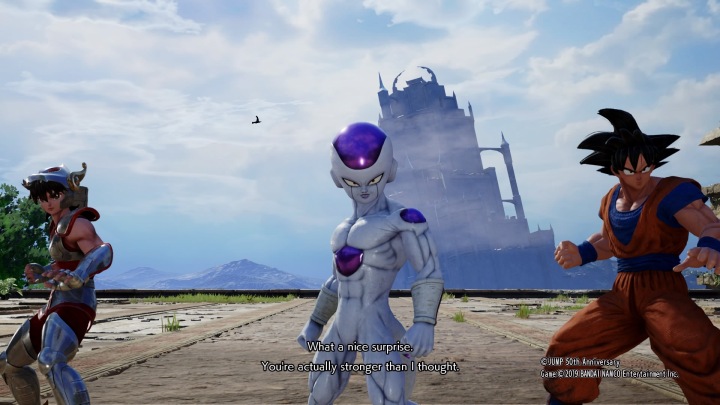