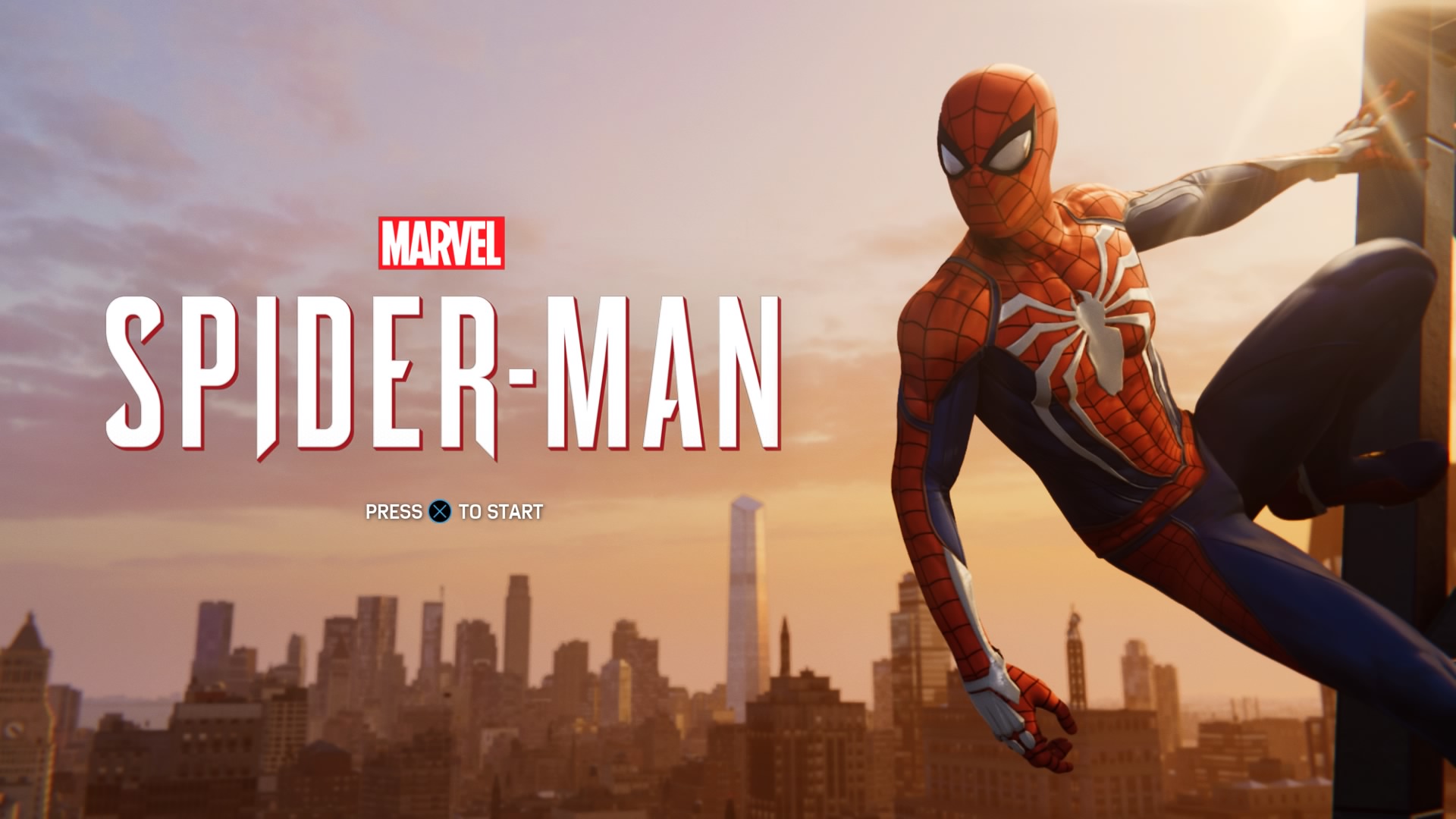 It’s finally here and most people are already going to compare this latest entry of Spider-Man to the previously best title so far for the web slinging superhero Spider-Man 2 (mainly for the PS2) but I’m not most people. I’ve played every terrible Spider-Man game, even the horrific PC port of the legendary Spider-Man 2 and various other ‘ok’ titles such as Edge of Time. I can tell you now Ultimate Spider-Man with its cel shading art style and pretty good story was the last great Spider-man game so does the new massively AAA swing its way to victory then? Or does it simply linger as a forgotten spin-off?

Yes I was surprised that the official title is Marvel’s Spider-Man as well. Still this sets the standard for what sort of Spider-Man we’re dealing with here. I’ve read frankly ridiculous amounts of comics, watched far too many cartoons and I’m crazy hyped for the new animated film on route so it’s incredibly refreshing to have a Spider-Man game that starts off with him already grown and aware of his powers. None of the usual, “Uncle Ben noooo!” cheesy drama, the occasional nod to Ben sure but it’s a level of story that’s incredibly accessible, in the same way you could pick up any successful comic series issue and carry on enjoying the current story arc. None of the same old rebooted retread we’ve seen a hundred times before. This might be an older Peter Parker but it’s full of nice familiar touches, Octavius is here but he’s a mentor this time around in a bitter rivalry with Mayor Osborn. You can see the super villain twist coming a predictable mile away but it’s still a nice touch. MJ is the current love interest but Peter’s screwed it up again so it’s a simple story of “will they get back together?” There are dashes of past and present thrown in for good measure all over it’s a brilliant mix of new and classic Spider-Man.

Essentially boiled down the story is a good Spidey tale, it’s not the best so don’t expect to be gripped dramatically about his angst and cliff hangers but Spider-man has always been a good reliable quality. In that regard this is absolutely spot on. It’s full of little nods to previous comics arcs and entries, there are so many nods it becomes a Churchill advert but refreshingly they aren’t forced. Everything has a natural flow to it that’s charming. The story is short, but then most spidey arcs are, so again this isn’t really a shocking revelation.

Let’s get down to the most important question though. The question that makes or breaks a Spider-Man experience. Is the web swinging any good? Simply put, the swinging is great. It’s not perfect it’s kinda odd. You start off swinging everywhere in New York, loving the details of the map and finding little touches and locations that just make the nerd in you yell, “I KNOW THIS PLACE!” Swinging high and enjoying the mechanics that make Spidey zip along with ease. The strange thing is though Spider-Man is so fast and agile using parkour and wall running that if you’re in a hurry swinging is only 1/3rd of the route you’ll likely take. The longer you play and the more you get used to his skill-set the less you rely on the swinging.

Combat is an odd mix of stealthy one hits, manic flipping around, fast paced dodging and at times it can be a little too manic. You upgrade Peter through gaining EXP, levelling up and the skills you unlock focus on various aspects of combat (typically unlocking abilities for better crowd control or dealing with a specific type of enemy) If like-me you put your upgrade points into web swinging for kicks you’re going to find combat is as much hit and run tactics as possible. This starts off tricky but the more you realise that Spider-Man’s abilities lends itself to gadgets, quick hits and zipping around the easier the combat becomes. It’s still a tough game though and more than a few times I was seeing the GAME OVER screen because I’d just missed dodging an assault rifle and fist.

As with any Spider-Man game there are stealth sections and yes like any Spider-Man game these are hugely hit and miss. While you play as the web crawler taking out goons in areas that feel straight out of Arkham Asylum these moments are fantastic. Laying out traps, taking out safe targets (utilising your Spider-Vision) everything all just clicks nicely together. When you’re playing as MJ or Miles and you are forced into slow crouching sections, through areas where one spot from an enemy is an instant fail, these moments let down the whole experience. More annoyingly they happen more often than you’d expect and you’ll likely find yourself avoiding the story missions entirely for the side quests. It’s a strange juxtaposition to have fun open world activities, brilliantly crafted cutscenes marred by boring slow frustrating gameplay sections.

Just like every other open world game you can’t avoid the side quests entirely either (not that you’d want to). The game has crafting (because what AAA game doesn’t?) but the crafting materials are finite. You’ll find yourself zipping around the city to handle side quests such as stopping robbers, completing research and various challenges. These are essentially combat encounters, time-trial races and mini games that you have to complete to unlock items which then in turn are crafted into better web gadgets or suits with new special abilities. The suits are so interesting and varied that you’ll find yourself playing the game more to unlock those than anything else.

The focus on suits and their looks comes from Spider-Man’s main core gameplay mechanic; Photo Mode. Taking amazing photos of Spider-Man. That’s it. Check Twitter and you’ll find all people want to do is use the incredibly fleshed out photo mode and take amazing photos because if you’d not realised by the screenshots yet this game is gorgeous. What Insomniac Games have made here is one of the best looking games the PS4 will ever see. Even if you don’t like looking at Peter, the city of Marvel’s New York is just stunning. From finding Alias Investigations to scaling the Avengers tower it’s all just beautifully crafted. The engine handles running up buildings to skydiving and zipping past lights and streets with a solid framerate and I found myself only completing the story to whizz around town more. Taking photos of locations, hunting out collectables, anything to find new tasks to unlock new suits and then swinging around just to look cool.

The acting is top-tier voice work and the banter is spot on. Some of the dialogue and cutscenes have brilliant one liners that you’d expect from any box office hit and are animated superbly to match. It interestingly mixes between the humour and seriousness of the Amazing Spider-Man’s Andrew Garfield and Homecoming Spider-Man’s Tom Holland. MJ, May, Miles and Yuri are all well voiced and even Fisk, Martin, Osborn and Otto hit the tone magnificently. All of this is a shame then that the music is absolute trash. Sure it’s orchestral, well made, swelling and a high quality but it’s just dull as dishwater. After a few hours I found myself turning it off as it was making the experience worse for being there. Swinging between locals hearing yet another uplifting orchestral epic was crushing the excitement. I found the best way to play Spider-Man is with picking a playlist of 70s, 80s and 90s classics then pop that on random.

The strange thing about Spider-Man is how good it is but never reaching for any kind of greatness. If you take out the Spider-Man aspect from this game you’re essentially left with a nicer looking version of Infamous Second Son, that’s not a bad thing it’s just not particularly mind-blowing either. The story is ok at best and the playable sections within are largely terrible but the cutscenes are fantastic. There is the same old open world item collectathons you expect with any tired old open world game but these have little trinkets of personality in them. The enemies seem tired and generic but even they get slowly dialled up in difficulty as you go. The world is full of things to do and fun to be had it’s just constantly held back by annoying flat missions that drag out far too long. It’s pretty, fun, frustrating and annoying in places. Just the kind of sunday afternoon game you want.