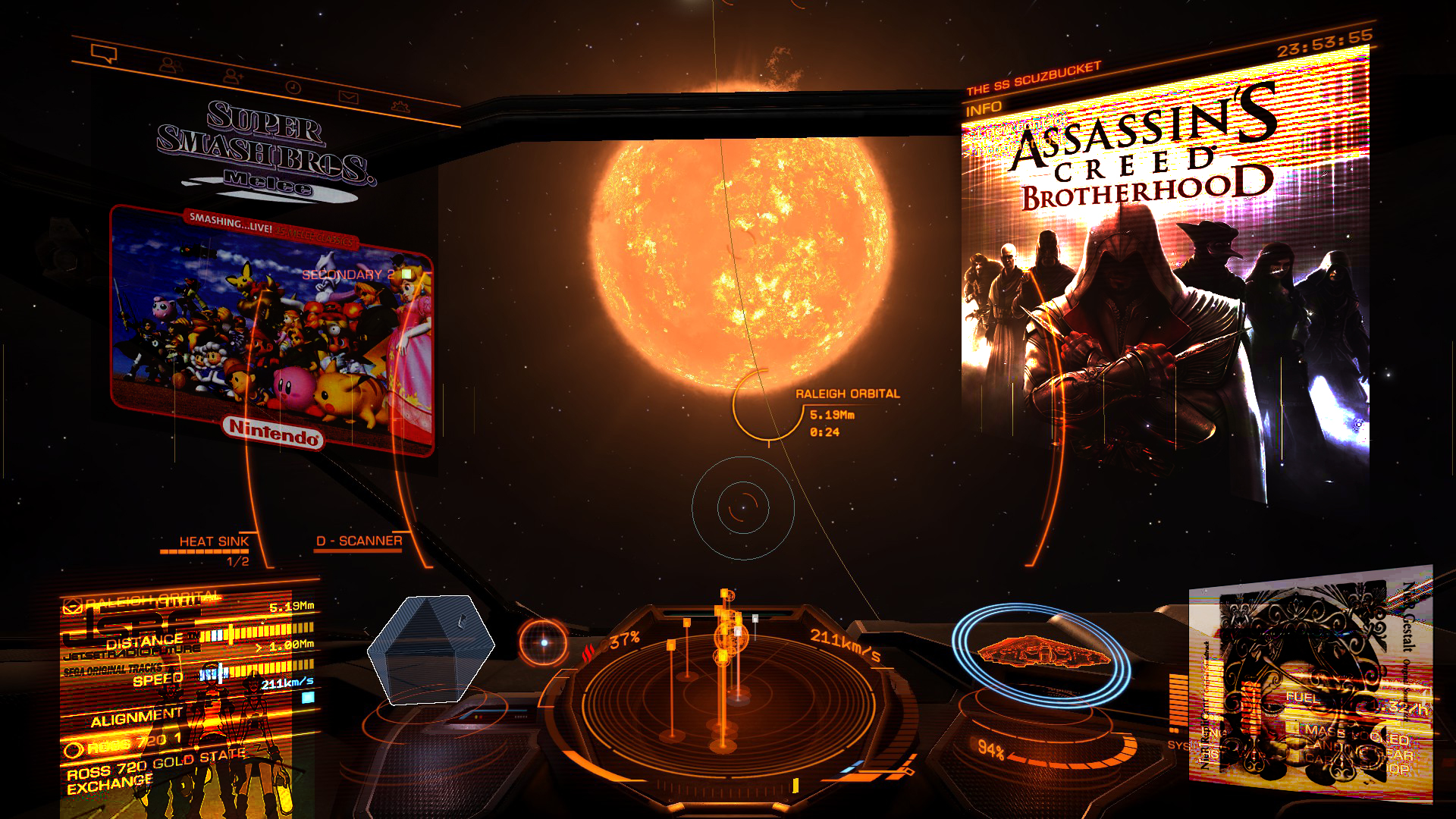 Elite, Star Citizen, No Mans Sky, X3, Eve and various other space flight simulation games are all very nice long games (depending on how you play them obviously) Where you can lose yourself in the grand majesty of time and space. What do you do though when you’re already tired of listening to your favourite podcasts and you muted the in-game music 15 jumps ago? Well don’t worry! I’ve the perfect soundtracks for you.

Nothing gets your blood pumping as you leave a dock to the music of ROLLLLLIIIIING STAAAAARRRRRT. Not to mention the fact that once you get into a heated space laser exchange most of the lyrics are, “ahhh ahhh ahhhh” Speeding through the cosmos at 1000 light-miles per hour you can take those handbrake turns shifting off the engine just to fire it up, hammer the boost and speed through the space station posts to the finish line! You to can be the King Of Speed with these classic rocking tracks, just be sure not crash into anyone along the way or let the space police catch you.

It’s so good it fits literally any space game or even long haul trucker sims. I’ve not personally liked No Mans Sky that much since launch but the soundtrack was highly recommended and I gave that a listen. Supermoon has been on my MP3 player ever since. The jury’s still out on it NEXT is a drastic enough shift to make the game worth playing (something is in the works for this) but the soundtrack is worth a listen regardless. Hopefully the music has definitely put the artist 65daysofstatic on the map for some or at least named a planet after them.

Automata has a good soundtrack but the original Nier has a soundtrack that’s best described as crushed ear candy melted down and injected into the pleasure centres of your brain. It’s objectively one of the greatest soundtracks of all time even if the game isn’t. What better tracks to have when exploring vast oceans of space than melodic vocals in a uniquely original language (written especially for the game) Try not to get too paranoid during the Shadowlord track and accidentally start seeing space pirates where there definitely aren’t any, sitting, in the shadows, waiting to shoot you and take your precious loot and most definitely aren’t hiding behind that asteroid you just passed…

When you’re alone in space sometimes you need something a little more uplifting and upbeat so it’s an obvious choice this one. Mixing up tracks from the original Jet Set Radio and adding in some fresh (for the time) beats making it perfect for the space jams. Not only does it have a few racy tracks that will help with lonely travels into the abyss but the original tracks remixed are so upbeat it will be hard to be blue. Perfect for those long shifts patrolling sectors, now made considerably more enjoyable pretending to tag the nearest planet in your artwork.

Swelling orchestral moments and familiar notes. You’ll find yourself both uplifted and pleasantly surprised by this one. The surrounding wonder of the cosmos will create such a sense of magnificence that you’ll feel like you’re in your very own space opera. Everyone knows the music to Mario and you can picture yourself as a Federation envoy using such a simple melody to welcome the bizarre tentacle monster race into the collective. The only side-effect is you might be more inclined to get in a space battle rather than simply flying by only to be knocked out into oblivion by a master-hand.

Sure it’s short and sickly sweet but there in lies the charm. It’s punchy, powerful europop that will have you barrel rolling past a space station and whizzing through asteroids with reckless abandon. “Can you feel the sunshine”, will be especially poignant when you’re jumping out of hyperspace and Super Sonic Racing away from being crushed by its gravity. “Living in the city, you know you have to survive”, depending on how Star Citizen ends up and if you end up on the run this might end up saving your life at some point.

Not typically a soundtrack that springs to mind when you want to focus on your ongoing quest to make either money or fame in a deep space fantasy. Ubisoft maybe well-known now for open world games and largely inoffensive and forgettable music that goes with them but the Brotherhood soundtrack manages to be just punchy enough to set itself apart nicely. It swings across with enough weight to the fill the sound of space nicely. Just specialize in cloaking technology and you can live out your Assassins Creed BigBang experience before the series eventually goes all the way back to the start of history.

The temptation to put Sonic 06 in this list is high (the game is garbage but the soundtrack is staggeringly brilliant) but Generations just trumps it by having more catchy beats that just lift it that bit higher. Classic tracks to fly to while new remixes bounce you to the outer limits. It keeps your pace going for when you’ve been tasked with another rat run for fuel. Just remember to keep your cats away from the keyboard when you drop out of hyperspace.

Just slightly better than the Skyrim soundtrack (it was a close call) you’ll find yourself toe tapping, humming and picturing the grassy hills of the Witcher universe while you traverse the 50th moon of grey dust for a lone scanner. Nothing makes a space station more appealing than the warm jaunty tunes of an inn’s shanty being piped through your speakers. If you add in the fantastic Miracle of Sound tracks to this soundtrack you can even sing along as you go flying through the stars, just be sure to turn off your mic first.