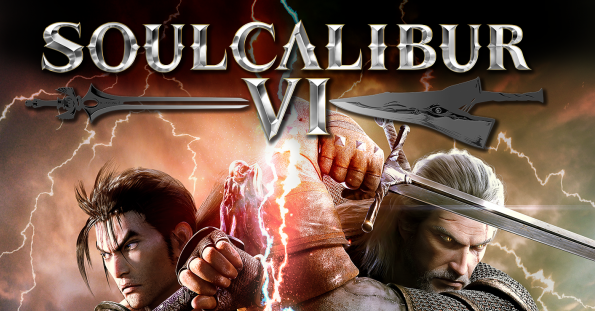 Soul Calibur has always been an odd fighting game series to me. It always reminded me of Last Bronx on the Saturn, a 3D fighter where the weapons don’t work as you expect. I’ve played almost every story mode of every Soul Calibur (except 3 who needs that?) but its never been a top 5 favourite of the genre. I’ve always kept an eye out for the next instalment though and that being said, I think everyone who’s played a Soul Calibur game has enjoyed hours in the custom character creator to make it a bizarre anime cosplay fighter or remembers playing as Link or Darth Vader at least once.

I’ve kept an eye on the game since The Game Awards 2017 reveal but given I’ve yet to finish Witcher 3, Geralt is a nice addition but I’m not as excited as everyone else about it. I still remember how broken Yoda was when he was a guest character and how Heihachi was nice but difficult to stand up to anyone with a pole or long reaching weapon. It was fun to have Ezio in the game though so maybe it’s a call to add more guests? The open beta was running over Friday 28th September to Sunday 30th September and that gives  plenty of time for a jump into the action.

We’re off to a great start as a lot of characters are playable even Tira. She’s clearly in a different frame to show she’s day one DLC. Frankly it’s bonkers given she’s a character staple. Day One DLC is fine when it’s just costumes or cosmetic but this isn’t good. Gotta please shareholders somehow I guess. The lack of training mode, offline VS or anything other than Ranked online is a real annoyance and being kicked back to the main menu if you want to change character is super frustrating. Still it’s a network beta test so you hamper these expectations, they have to test that network somehow and the developers have found this is the way to do it.

When you’re playing as the classic characters you could be forgiven for thinking your playing Soul Calibur 5. The game hasn’t changed that drastically when you first start out and it’s only when you get into a good fight you start to notice the changes. It’s good to see the classic start to each fight has remained and the swinging camera while a narrator talks over about how destiny is worth 2 hands in a pond of hopes or something is still brilliant. Japanese voice options are always welcome in any game that originates from there, so thanks for that!

Once you get the feel for the fighting system you do realise it’s incredibly fast and fluid. I mentioned before how at the start it feels like you’re playing Soul Calibur 5 but the more you get into playing, the faster and more mental it becomes. The slow-motion moments of rock paper scissors that occur during clashes, the slower build up of super meter and the devastating pace of it all does all lead it to a nice fighting system. The fact the game is programmed in with an underlying netcode probably helps the offline feel like online play but I’m happy to report that the online is fantastic if that’s all you’re going to play.

This game looks ludicrous though. The series has never exactly been shy about fan service but this is Dead Or Alive Xtreme Bikini challenge levels of cringe. I realise DOA6 said they were toning down the sexualization of their characters (we’ll see how much that holds up down the line) in order to be taken more seriously as a fighting game but this wasn’t an invitation for Soul Calibur 6 to become more extreme in its stead. The female character outfits are dire. You can smash off armour the same as previous Soul Calibur titles and when the scythe wielding Zasalamel loses his armour you can see his skin, when Sophitia loses her armour, her already skimpy outfit has its strings cut.

If you thought SNK heroines was bad you ain’t seen nothing yet. Boing boing slice boing boing. The artwork for Soul Calibur has always been great and still is when you see it loading between bouts but the levels of cheesecake just mar so much of the fun to be had. Lush backgrounds, classic voices, brilliant combat and solid netcode spoilt by iffy DLC practices from the get go and bloody ludicrous sexualization of its characters. It’s almost ChunLi Street Fighter 5 beta levels of bouncing here. Shame.