Kaaaameeeeehhaaaameeeeehaaaaa! There we go. That’s another Late to the Party review done. Rinse and repeat surely? I’ve obviously been a little excited for this with the beta winning against Dissidia and the various ways to deal with the cravings. So was it worth the wait?

Short answer, yes. Just watch the intro for more. It’s like every kind of anime Dragonball fan-service in rock cgi glory. Rock, GOKU, Rock, VEGETA, Rock and so on. They’ve nailed that Guilty Gear esque metal smashing madness into muscles and flashes of light. Oh the game? Well it’s good as well I suppose… Seriously though, go watch the intro to get some kind of context for my feelings on this. Here click this and make sure the volume is up! It’s ok I’ll wait….. See? Of course you do, it’s that fantastic!

The fighting system masters of Arc Systems are simply masters of making really functional, mixed and deep 2D fighters and this 3 VS 3 2D Tag fighter is no different. It is possibly their simplest game yet to pick up and play. It uses the light, medium, heavy, special system that most indie fighters tend to lean-to (A, B, C, D attack buttons with L1/L2 being for the assists) but this works brilliantly for a series that’s all about fireballs and special moves at the core having a dedicated fireball button makes perfect sense. The simple combo system where you can press the same attack button for a simple combo or rotate (so square/W > triangle/Y > circle/B) helps you learn the ropes and the easy tutorials explaining both the dragon rush (that sends you flying at the opponent) and the simple super move system (236 R1/R2 – number pad notation people!). It all comes together and lends itself to be the most beginner friendly fighter outside of Super Smash Bros.

The setting does continue from the Dragonball Super anime series with Hit and Goku Black as playable characters but even a passing understanding of DragonballZ isn’t even required to enjoy the game. Although Frieza joking about killing Krillin never gets old and people talking sass to Yamcha despite him now being on their level is pretty funny.

It’s an odd fighter, you can get into it easily enough but a few matches online and you’ll quickly start to see how deep it can be. Once you get deeper into the mechanics and you have to learn how to counter, string combos and get the most out of your assists and supers it really starts to open up. Each character has not only a different move set but a completely different play style with only the various versions of Goku/Vegeta feeling similar but even their differences are a lot deeper than face value reminiscent of a Ryu/Ken setting. Also scrapping character transformations to focus on their specifics is a genius move, meaning you can learn Goku as a character in his Super Sayan transformation and still get a superbly animated glimpse of Super Sayan 3 during his Meteor Smash super move instead. It allows characters to be impressively balanced accross the board and only Gohan has a different ‘mode’ unlocked by slowly leveling up during battle, still even this is well balanced and functions more as a super at the end of a combo that slowly powers him up through the fight.

The strangest change to the setup is a lobby based system for everything. Previously in Arc System Fighters (and a few other Bandai Namco titles) you’d only use a chibi character lobby for online mode, picking fights and updates. Now it’s the start of the game and if you find that the group of people doesn’t quite fit you can switch out and pick a different one. It does work offline but this slows down loading in and out of modes especially after a long go on story or arcade so you have to get into the habit of loading the game, deciding on a plan and either wandering around or switching to offline. It feels like a smart move to get more people playing vs online and not resulting in a short-lived ghost town. It’s just a shame it results in plenty of exiting Story/Arcade to find your connections been dropped again.

The most important thing to note is how good Dragonball FighterZ looks. This is Arcs best looking game yet. I’ve always held Naruto Storm 4 as the best looking anime game so far but this takes that and surpasses it fully. Easily able to follow the action, the simple hud and supers that can literally obliterate the stage are a feast for the eyes. It’s worth playing just to experience smashing an opponent into a mountain then to not only destroy his teammate but explode so strongly it’s seen from space. These screenshots just don’t do the games looks justice. When it moves it moves with such a blisteringly well crafted frame rate it’s just visually amazing.

The voice work in both Japanese and English conveying the fights brutality and over the top madness to perfection. The music is classic guilty gear sounding metal soft thrash that fits the power blasting action well. Even the effects, explosions and simple menu noises fit nicely. There are many nice little touches to, when Nappa fights a smaller opponent he’ll typically start mouthing off about them differently to a fighter the same height as him. There’s even the best thing a 2d fighter based on an anime can do; There are custom intro cinematics. What this means is that if your first two fighters (yours and your opponent) have a history they’ll have a little scene before the fight starts. A great example is if you chose Cell Vs Teen Gohan; You get this brilliant little scene where Android 16’s head asks Gohan to protect the planet and Cell looks surprised as Teen Gohan goes Super Saiyan 2.

Dragonball FighterZ is a bloody big game. It’s sadly not packed with pure quality and there is a lot of grind most of which comes from the Story. It is a brilliantly cheesy ‘what if’ with the new character Android 21 wrecking up the world with clones and resetting everyone’s power level for “reasons”. The net result is even Tien and Yamcha can fight evenly against Majin Buu. It works well enough and is quirky enough to hold interest but each character has RPG like stats in Story mode and you fight around a very basic board against boring clones of the main cast. It’s only when you switch to arcade mode that you realise how much your missing out in animation, lines and supers that are story locked (because why would Clones scream anger at their opponent?). It feels like that they were trying to capture the original Budokai story board modes but without the random unlocks and simply a grind of clone bashing and occasional Buu it’s not the same.

Arcade mode is where the offline play is. Even that isn’t totally immune to irritation mind with what can be an infuriating tree system based on grade; The better you do the higher the tree you go. The net result is screwing up a match, getting a B grade and resetting your run to the start just to finish higher. This works for die-hard players wanting a challenge and it must be said the top of the tree is what you’re aiming for. You can even unlock the pre-order bonus characters SSGSS Goku and SSGSS Vegeta via the hard modes arcade runs so there is definitely a big reward for the time put in. You have to remind yourself to finish the arcade mode runs each time for the Zeny even when you drop a tier and just play for the experience.

Lets get to the cringe then; There are two currencies in Dragonball FighterZ; Zeny that you earn doing anything and everything from arcade, story, verses and online. You can buy a random loot crate with the Zeny and the economy of it isn’t bad. One arcade run can usually get you a few capsules and buying 10 in one go lets you buy in bulk for a reduced rate. This does unlock everything through; colours, chibi lobby characters, player ID borders and various cosmetics. There doesn’t appear to be duplicates but you can win Golden coins which are for your rare loot drops and these take 10 coins per roll of the dice. This feels a little iffy and I’m sure the £ value will change as the game goes but for now it’s a minor blip. You can save you your Zeny for the 2 pre-order characters but that’s going to take a lot of playing and is a very boring way to do it when you can get good instead.

The net code is tip-top. You can see how many frames your missing and the forced lobby system for offline and solo play makes a lot of sense when you take multiplayer into account. “Just a quick match”, is uttered regularly while on route between story and arcade and it’s no accident that their on opposite ends of the lobby. There is also a few areas of the lobby that still have yet to be populated. Give it time I recon we’ll see a fair bit more in the mix (survival mode perhaps?). The middle of the lobby is dedicated to Arena matches for any quick challenges. Ring matches are easy to pop up yourself and these are quick rooms for ‘winner stays on’ matches. Failing that good old-fashioned Ranked and Play modes are tucked in at the top of the map, making lobby characters walk past other players to get there. There are plenty of people complaining about this but they are likely the same that jump from game to game and can’t see how this is going to help Dragonball FighterZ when the next big game is here and well in its life-cycle and people are still looking for matches in this.

Essentially Dragonball FighterZ has an annoying name (who else keeps calling it DragonballZ FighterZ? Can’t be just me!), it’s a great game but not without its minor flaws. The lack of legacy controller support feels a bit cheap and the constant connection to the internet is an irritation that won’t go away. These are just minor bug bearers though and even the loot crate system is a reminder of how it can exist without ruining a game (like Injustice2). The game is loaded up with a ton of nice little extras and features that just dress up the core gameplay, which doesn’t need any dressing as it’s so good that the grind isn’t even noticeable. Hours of fighting clones later and you wonder if you’ve finally achieved Super Saiyan until you go online and die like Krillin, and you still love it. 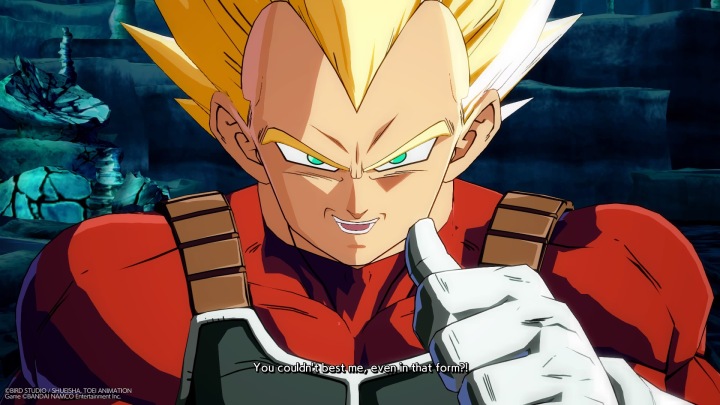